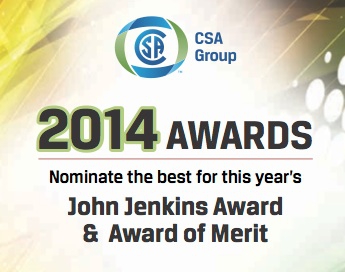 January 21, 2014 – CSA Group, a standards-based solutions organization, has opened this year’s nominations for the Award of Merit and the John Jenkins Award. Don’t delay! The deadline for nominations is this Friday, January 24.

Award of Merit
The award recognizes individuals who have demonstrated leadership and contribution in developing and advancing voluntary standards. It is open to all present or past CSA Group voting members, as well as former CSA Group employees who:

• served in CSA Group committee activity or other associated standardization work
• showed leadership in technical, administrative or special committee activities
• published papers, or made public addresses, which have been of special benefit to the work of the association
• advanced the prestige or interest of CSA Group.

John Jenkins Award
This award, which commemorates John Jenkins, is bestowed by CSA Group upon the person judged to have rendered distinguished service in the development, advancement and application of voluntary standards. Nomination is open to individuals who:

• have received an Award of Merit or a Personal Award of Distinction
• showed leadership in various areas through personal involvement over a period of years, in the development, advancement and application of voluntary standards
• encouraged the development and advancement of standards both nationally and internationally
• through foresight and action, helped to substantially advance the arts and sciences related to standardization.
Note:
• CSA Group employees are not eligible for the John Jenkins Award.
• A nomination for the John Jenkins award must be supported by three voting members of CSA Group.

CLICK HERE to access both nomination forms, which must be submitted no later than Jnuary 24. You may be contacted for further information and assistance to prepare a summary of significant highlights of your nominee’s career and achievements.