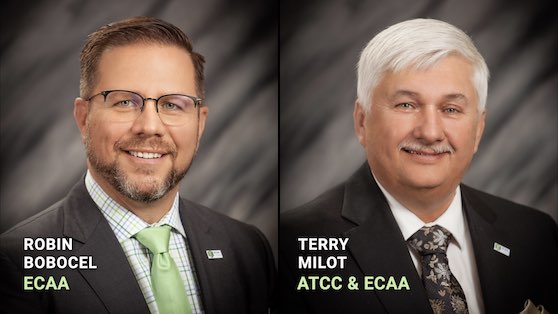 July 22, 2022 – Earlier this year, representatives from the 11 association members of the Alberta Trade Contractors Council held their first meeting as a “council” board of directors. This is significant because, operating under a Memorandum of Agreement since January 2014, the group had been operating as a “coalition”.

Now, the relationship is formalized as a not-for-profit society. Also, an additional member has joined the group, bringing the total ATCC membership to 11 construction industry associations.

“Since we signed the original [Memorandum of Agreement] in 2014, we have been writing the preface to what has the potential to be a great story,” said Terry Milot (vice-president, Chemco Electric Ltd.), who was elected as the council’s first chair. “We are now at the beginning of Chapter 1, where the ATCC expects to deliver an exciting opening scene.”

Milot—who represents the Electrical Contractors Association of Alberta (ECAA) at the ATCC—went on to say that while there is still much work and dedication needed to achieve the council’s immediate priorities for prompt payment legislation and new structure under the Skilled Trades and Apprenticeship Education Act, “we are confident that trade contractors can deliver on these projects”.

Electrical Business Magazine chatted with both Terry Milot and ECAA’s executive director, Robin Bobocel, with the aim of learning more about the council’s priorities, and how they tie in with ECAA member priorities.

EBMAG: Let’s dive right into the Alberta Trade Contractors Council [ATCC]. Robin, from the perspective of your electrical contractor members, what are your priorities and hopes that could be realized through the ATCC?

ROBIN: I think the biggest thing for us is being able to “triangulate information”. It’s really valuable for us—as electrical contractors—to be able to understand what the related construction trades are hearing, and in which direction they are going. This way, we can work together; whether it’s long-term planning, responding to government policy or, quite frankly, just improving the construction industry as a whole. The 11 associations that make up the ATCC really bring all their strengths and abilities to the table. So far, I am really encouraged… I’m learning from my colleagues at the other associations, and this will help us better serve ECAA members, and help us improve the electrical trades in Alberta.

EBMAG: Getting to one of ATCC’s priorities, where are we at with prompt payment in Alberta?

TERRY: There have been some formal meetings with government, and there are still some things they are working through. We’re very confident that the process we are putting together will work, and hope for an implementation date this August. One of the things that we’re working on—and it’s actually really important—is a “proper invoice”. So we’re working with some legal firms and conducting education sessions for ATCC contractors so they can learn what constitutes a “proper invoice”. So when the general says “you need to do this, that and the other thing [before I pay you]”, they will have the knowledge and confidence to say, “No, that’s not a legal requirement. We’re not doing that”.

ROBIN: The term “proper invoice” is so pivotal because it will be used in the legislation. There are certain requirements that need to be met to help ensure contractors get paid on time, as per the intent of the legislation.

TERRY: Right, so we have to prepare our own people. ATCC represents some very small contractors all the way up to some very large ones, but everybody needs education. So we’ve been hosting webinars and, believe it or not, we’ve had people come up with questions that nobody’s even thought of. And we’ve been working on this thing for seven years! But, we address them and, hopefully, we get it right. This is an opportunity to clean up some of the bad habits that have been developed over the last 100 years.

EBMAG: Let’s move on to reforming the Skilled Trades and Apprenticeship Education Act. Where do you hope this will end up?

TERRY: One of the main things is to have equal representation on the boards and a strong voice with government so that, as an industry, we can help inform their decisions, rather than contractors being on one side and educators on another. We have to look at apprenticeship holistically; what’s good for some may not be good for all. Again, that’s the benefit of having all these associations under the ATCC umbrella. Apprenticeship and education are important to us all, but each trade has its own issues.

TERRY: Educators want to get people into the classroom, but maybe some industry sectors don’t need any more apprentices. I had read a pan-Canadian report that identifies the number of electricians across different provinces. When you look at Alberta, the numbers are staggering! We have way more apprentices than we can employ. But until you have that information and sit with government and our educators, you can’t move forward with a framework that reflects industry realities. And it can be difficult at times, because one ministry or department may have different views from another.

ROBIN: Terry’s right in that it can be difficult at times, but I don’t think it’s intentional or malicious. The government has so many things on the go right now, and they have a very small amount of time in which to get all of these important pieces of legislation done. I would go so far as to say they may even appreciate that we are being proactive with our consultations, because it helps them focus and get stuff done.

TERRY: Robin makes a good point. Government really is working at breakneck speeds and, based on countless conversations, emails, and so on, they are very much an open book. But, we’ve discovered that “book” has many chapters. Take Electrical, where technology is changing so fast; some of the things we used to teach may not even exist any more, so you need to have a relationship with all of these parties and get everybody on the same page. From our standpoint as one of the ATCC association members, we’ve learned a heck of a lot by listening to other people’s trials and tribulations.

EBMAG: Speaking of changing technologies, I would be remiss if I didn’t ask about the “energy transition” and how it is playing out in Alberta. Electrical Business Magazine regularly reports on new solar or wind projects, and it sounds like Alberta is the land of milk and honey for renewable energies. But you guys are there, at Ground Zero. Are electrical contractors excited by all these renewables projects? Do they miss the oil & gas megaprojects?

TERRY: Despite all the misconceptions out there, tradespeople in Alberta really care about the environment, and really care about the province. We are not anti-solar, anti-wind… we embrace them! In fact, the Electrical Contractors Association of Alberta is a member and sits on the board of the Alberta Energy Efficiency Alliance. We welcome renewables, and we want to show the world that we care. That said, energy security is a real issue these days. Realistically, we are not going to be off fossil fuels next week, next month, or next year, so we want to extract them responsibly. We continue to be more effective at how we extract energy from our non-renewable resources. Alberta is a leader on that front.

ROBIN: Any new opportunities for job creation are welcomed, but there is always some concern around ensuring that we have all the necessary skills and enough qualified tradespeople to deliver these projects, and that the work is not being done by someone with, say, a “micro-credential”. So we’re being vigilant and ensuring qualified trades are doing the work—and that’s just good for everyone.