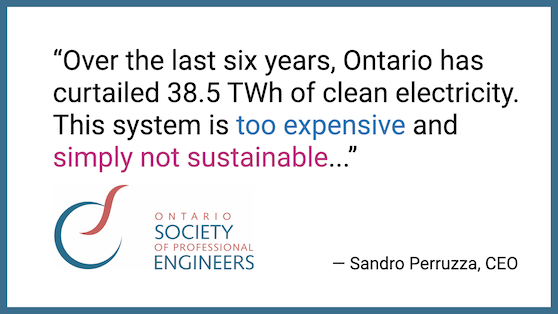 September 4, 2020 – “Over the last six years, Ontario has curtailed 38.5 TWh of clean electricity,” said Sandro Perruzza, CEO of the Ontario Society of Professional Engineers (OSPE). “This system is too expensive and simply not sustainable, which is why we are calling upon the provincial government and Ontario Energy Board to explore reformed retail pricing plans for consumers to subscribe to on a voluntary basis.”

(For clarification, we reached out Mr. Perruzza; by “clean electricity”, OSPE is referring to non-emitting generation, such as wind and hydropower.)

OSPE recently updated its data on curtailed (wasted) electricity, and concluded Ontario wasted a total of 6.5 TWh of clean electricity in 2019.

The data indicates Ontario’s electricity pricing system is not structured to account for the low demand it has been experiencing, says the society.

“The province also continues to export even larger amounts of surplus clean electricity to neighbouring jurisdictions at a lower price than the total cost of production,” said Paul Acchione, P.Eng., OSPE’s chair and former president. The society says surplus hydroelectric-, wind-, solar- and nuclear-generated electricity was exported to adjoining power grids from 2014 to 2019 at prices much lower than the cost of production.

Total clean electricity exports in 2019 were 19.8 TWh, compared to 18.6 TWh in 2018. OSPE estimates that about half of those exports were surplus clean electricity, “enough to power about 1.2 million homes for one year”.

Ontario’s current electricity system is built to support businesses operating between the hours of 9-5, with a large percentage of homes left idle for a minimum of eight hours a day. Electricity consumption patterns have drastically changed over the last six months, primarily as a result of shifts in the business climate and workplace. These changes have led to an inevitable increase in wasted electricity.

“The restrictions Covid-19 has imposed on economic activity are already having an impact on Ontario’s electricity consumption,” said Perruzza. “OPG reported that, in the first quarter of 2020, hydroelectric curtailment increased by 130%. This will continue for the duration of the pandemic, ultimately resulting in a significant increase in the amount of curtailment in 2020.”

Despite high Ontario system demand peaks—such as those on some hours of the day in July 2020—there still remain many hours during the year with surplus generation that is either curtailed or exported at low prices, OSPE says.

Rather than continuing to waste viable, clean electricity, OSPE recommends the province leverage its excess electricity to:

Related
Increasing firm electricity imports from Quebec “imprudent and expensive” for Ontario
Ontario Clean Energy Benefit (OCEB) to kick in next month
Ontario needs to use more electricity to make it cheaper for everyone, says OEA
Ontario aims to create jobs with launch of the Clean Energy Institute
Tags