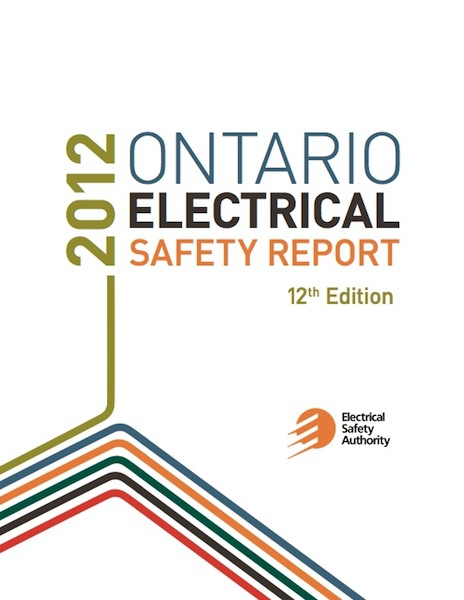 The report (12th edition, 2012, which you can DOWNLOAD below) notes that more than 70% of all incidents occur in four areas:

“While it appears that Ontarians are slowly getting the message about electrical safety, far too many people are still injured and killed every year, despite knowing the risks,” said ESA chief public safety officer Scott Saint (photo). “This isn’t just about awareness. People recognize the hazards, but they think they can beat the odds. Tragically, many Ontarians find out that they can’t.”

There has been a decline over the past few years in rates of electrical-related injuries and fatalities, yet incidents continue to occur in the same areas as before. Risk perception (rather than an unexpected event, for example) drives much of that risk, insists ESA.

Powerline contact continues to be an area of concern, accounting for almost half of all electrical-related fatalities in the past 10 years. Each year on average, three people die and five are critically injured in Ontario due to contact with overhead powerlines. While most members of the public know that a downed powerline is dangerous, consumer surveys indicate the majority fail to consider they may come into contact with a live wire when doing yard work and chores, notes ESA, like trimming trees or cleaning eavestroughs.

Leaving cooking unattended on an electric stove or failing to get older home wiring checked for problems are other common but high-risk misconceptions about risk that can lead to fire, injury, or even death, adds the agency.

Electricians continue to be critically injured on the job when working on energized electrical panels or commercial lighting systems. Research conducted by ESA reveals electrical workers and those who hire them often do not perceive these jobs to be high-risk.

“Electrical workers continue to be injured or killed: in some cases because they do not appreciate or have become complacent about the risk and, in others, because they feel pressured by their customer or employer,” continued Saint. “We need to better understand these perceptions so we can change them. Changing people’s misperceptions is critical to our goal of eliminating electrical-related deaths and injuries.”