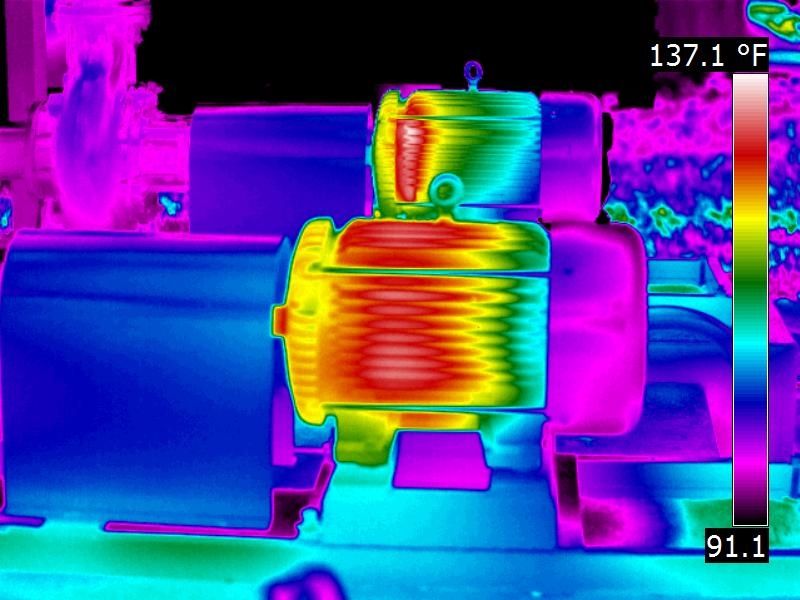 Infrared scan of a motor overheating. A typical indication of a power quality issue.

August 30, 2017 – To avoid power quality problems, as well as solve existing PQ ones, it is necessary for us to understand the type of loads on the electrical distribution system. Understanding the principle operations of the load and the characteristic distortion it produces—whether it be transients, harmonics or electromagnetic interference (EMI)—is extremely important.

For example, radio frequency welders will cause radiated RF that may interfere with the operation of some other equipment. Fast-switching IGBT-type (insulated-gate bipolar transistor) drive systems may introduce transients into the system. By understanding the principle operation of the loads and their interactions with other loads we can proactively plan a strategy to avoid potential problems.

Besides understanding the characteristics of the load, it is also important to be mindful of the load’s sensitivity to disturbances.

Part of planning a strategy to avoid problems, then, is to be very familiar with the electrical distribution system… its strengths and weaknesses, such as the short-circuit capacities at the common point of coupling. It is also necessary to understand there are different mitigation techniques for different problems.

Reviewing the basics
Before I get into an in-depth study of the electrical distribution system, I should emphasize and confirm some basic prudent wiring methods for electronically sensitive loads. For example, a common neutral for a single-phase load on a 3Ø 4-wire system plus the integrity of the grounding system determine whether we are solidly or resistively grounded. All of these things are important in trying to come up with a strategy for designing a reliable distribution from a power quality perspective.

While there are a variety of solutions on the market for mitigating/correcting PQ issues, installing the mitigating equipment is a trial-and-error method at the best when we don’t understand the problem we’re facing. Rather then improve the situation, we frequently make it worse.

Harmonic standards, EMI/EMC (electromagnetic compatibility) standards establish recommended PQ practices that set limits on some power quality disturbances. The application of these guidelines is sometimes very vague and, as a result, it is very easy to install mitigation equipment that will either not do the job or shift the problem elsewhere within the distribution system.

All mitigation equipment is designed with a definite purpose to correct one of the power quality aspects, but there is no silver bullet that will fix all electrical disturbances. (If anyone makes this claim, they are trying to defy the laws of nature!)

There is no silver bullet
With the first generation of variable frequency drives (VFDs), for example, it was recommended to install an isolation transformer instead of a distribution transformer on the supply side of the drive. The isolation XFMR served the purpose of dropping the voltage from 600V to 480V, since most of the VFDs are designed for 480V (mostly to satisfy the U.S. market… the market in Canada was not big enough to provide a 600V at the time). The isolation XFMR seemed to avoid a problem that eventually reared its ugly head when 600V drives became available.

With the new generation of VFDs, it wasn’t necessary to use the isolation XFMR on the line-side of the drive and, as a result, the drives started to malfunction; in multiple drive installations, one drive would destroy another.

It was natural to assume that installing an isolation XFMR on the line-side would resolve the problem, but it did not; on a 1:1 ratio of the isolation XFRM, the impedance would not be the same as it was from 480V to 600V. Therefore, trying to mitigate that problem with an isolation XFMR was unsuccessful and, in many cases, made the situation worse.

The “isolation transformer solution” was unnecessarily expensive when a 3% or 5% inductance series reactor would have very nicely solved the problem at a fraction of the cost.

Rules-of-thumb for power quality
Here are some suggestions when planning a reliable distribution system for electronically sensitive equipment.

1. Avoid common neutrals on a 3Ø 4-wire system.
2. De-rate or use K-rated transformers.
3. Run dedicated circuits from the common point of coupling to the sensitive load.
4. Utilize surge suppression on the branches, as well as the distribution panels, of the system.
5. Use a single-point grounding system as opposed to a daisy chain-type.
6. Increase the size of the grounding wire to the next size up from the minimum size recommended by the code.
7. Use natural phase-shifting cancellation of harmonics by XFRM configuration or use of zig-zag transformers.
8. Provide physical separation between power-carrying conductors, data lines and communication lines.

Conclusion
Because of differences in philosophies between engineers (e.g. electrical versus telecom), as well as wiring methods that are outdated for powering electronically sensitive equipment, you can expect power quality problems to arise with sensitive loads in the distribution system—even after the precautions taken above.

In many cases, modifications or upgrades in equipment cause PQ problems because they weren’t thoroughly investigated for the impact they might have on the electrical distribution system and its present operation. When upgrading equipment or automating production lines, it is necessary to assess the possible interaction between the existing system and the new or upgraded equipment prior to implementation.

Adhering to some of these suggestions can help you avoid a lot of problems right from the planning stages of the distribution system. It is always cheaper to plan prudently than to troubleshoot a problem after it occurs. Ultimately, don’t do anything until you investigate, understand and/or rule out the possibility of interaction. Ω

Peter Kratochvil, C.Tech., currently serves as a technical advisor to Cos Phi, a specialist in the design and manufacture of power factor and power quality correction equipment (Hensall, Ont.), and a company he once owned before retiring. Prior to starting Cos Phi in 1990, Peter spent 15 years operating an electrical maintenance business specializing in electrical troubleshooting. He holds a Master Electrician Licence (Construction & Industrial) and Certified Technician (C.Tech.) designation. He also has a diploma in Technical Education from the University of Western Ontario, and has held an Ontario Teachers Certificate since 1982. Peter has first-hand experience in troubleshooting and providing solutions to a variety of electrical environments, such as pulp and paper, large commercial and industrial businesses, aircraft and offshore oil rigs. Visit www.CosPhi.com.