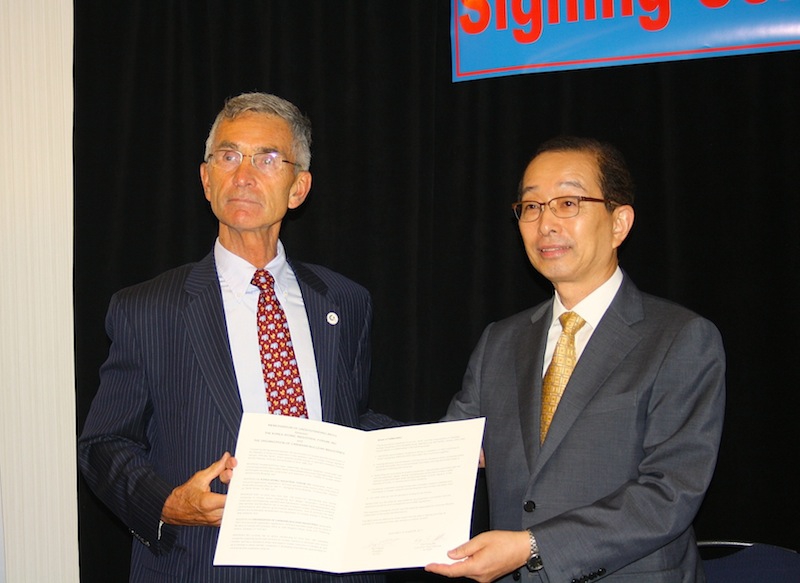 August 27, 2014 – The Organization of Canadian Nuclear Industries (OCI) has signed a Memorandum of Understanding (MoU) with the Korean Atomic Industrial Forum (KAIF) that outlines several ways the two will work together, including identifying opportunities for cooperation at nuclear projects in Korea, Canada or other countries.

“OCI celebrates this MoU signing and looks forward to building a strong working relationship with the Korean nuclear community,” said Oberth. “This relationship will be further strengthened by a planned OCI-led Nuclear Trade Mission to Korea in April 2015.”

The memorandum, according to OCI, “supports and promotes innovation and cooperation associated with joint development, design, testing, licensing and construction of pressurized Heavy-/Light-Water Reactors, and small modular reactors. OCI and KAIF will organize seminars in both countries to exchange information leading to enhanced collaboration and, possibly, the creation of joint ventures among OCI and KAIF companies.

Another objective of the MoU is to encourage and facilitate cooperation among Canadian and Korean nuclear research institutes and universities on nuclear research, development and education.

OCI is an association of 180 Canadian suppliers to the nuclear industry in Canada and foreign markets. Its members employ more than 10,000 engineers, technologists and tradespeople who design reactors, manufacture major equipment and components, and provide engineering services and support to CANDU nuclear power plants in Canada, as well as CANDU and Light-Water Reactor (LWR) plants offshore.