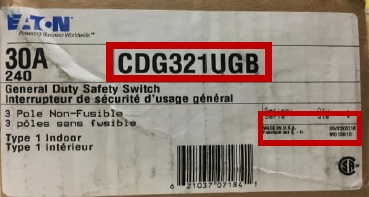 Catalogue number and date code can be found from shipping label as above. Photos courtesy ESA.

September 28, 2016 – The Electrical Safety Authority is notifying the public that Eaton has announced a voluntary recall of its 30A general duty 2- and 3-pole switches with catalogue numbers beginning with CDG221 or CDG321. This is because the line/load lugs may cause terminal overheating or allow wires to dislodge.

There have been no reported incidents or injuries, Eaton says. The products are to be returned to Eaton Canada for repair and/or replacement. For units that cannot be returned, a field repair kit is available.

Catalogue number and date code can be found from shipping label as above.