Electrified Transport Products Vehicles
“Together, we will write the future… one electrifying race at a time” 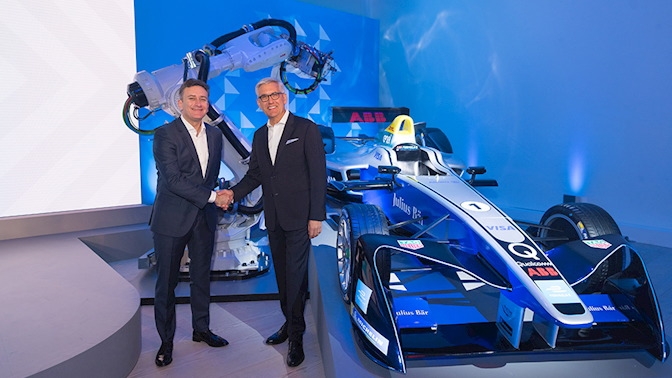 January 12, 2018 – ABB and Formula E are teaming up “to champion e-mobility for a sustainable future”, with ABB bringing its name and technology to the series, which will be now known as the “ABB FIA Formula E Championship”.

“We are extremely excited to partner with Formula E in writing the future of e-mobility,” said ABB CEO Ulrich Spiesshofer. “ABB and Formula E are a natural fit at the forefront of the latest electrification and digital technologies. Together, we will write the next phase of this exciting sports activity and foster high-performance teams.”

Since its first race in Beijing in September 2014, Formula E has established itself as the number one all-electric international motor sport, reports ABB.

“Together, as partners, we will showcase breakthrough technology on a global scale to fans and consumers who follow the ABB FIA Formula E Championship,” said Alejandro Agag, founder and CEO of Formula E.

ABB notes Formula E serves as a competitive platform to develop and test e-mobility-relevant electrification and digitalization technologies, helping refine the design and functionality of EVs and infrastructure, as well as associated digital platforms. By joining forces, ABB and Formula E will be ideally positioned to push the boundaries of e-mobility.

“Together, we will write the future… one electrifying race at a time,” added Spiesshofer.

The ABB FIA Formula E Championship is the FIA electric street racing series, and the world’s first fully electric international single-seater category in motorsport. The fourth edition will see 10 teams and 20 drivers compete in 11 cities spanning five continents in the fight to be crowned ABB Formula E champion. The next race takes place in Marrakesh on January 13, with the 2018 championship coming to a close in July.