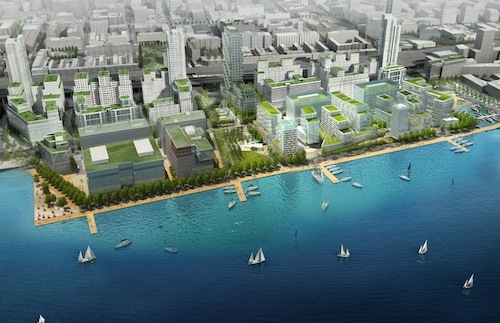 June 10, 2011 – Looking to move? Consider this–Toronto’s new waterfront neighbourhoods have partnered with telecommunications firm Beanfield Metroconnect to create what they say will be Canada’s first open-access ultra-high speed broadband community network, making it one of the most connected communities in the world.

“Broadband has become essential public infrastructure for 21st century communities, and the need for faster connections delivered over more robust networks has been intensifying since the dawn of the Internet age,” said John Campbell, president and CEO of Waterfront Toronto.

“This state-of-the-art network will help us establish a new hub of innovation and stimulate enduring economic growth to help Toronto remain competitive with other world-leading cities, such as Seoul, Stockholm, and Tokyo where similar broadband infrastructures exist or are now being built,” he said.

Every home and business in the new communities will be wired with fibre and provided with what Waterfront Toronto describes as “affordable and unlimited access to internet speeds up to 500 times faster than typical North American residential networks.” The network will also provide full community-wide Wi-Fi service, delivering internet connections starting at 100 megabits per second for residential customers and up to 10 gigabits per second for commercial customers.

But who’s going to pay for it?

“The network is being built without taxpayer dollars,” added Campbell. “Waterfront Toronto has facilitated an arrangement where our private sector development partners will initially provide the upfront capital and Beanfield Metroconnect will also invest in building the network.”

Beanfield Metroconnect is also required to ensure that the network is on par with that of the seven top global intelligent communities for 10 years beyond when the last building is built, it said.

“We are a Toronto company, and we are excited to be working with Waterfront Toronto to build on our waterfront what will be one of the world’s leading community networks,” said Dan Armstrong, founding partner, president and CEO of Beanfield Metroconnect. “As the Internet continues to develop and revolutionize the way people live, work, play and learn, the tremendous capacity of the network will ensure that everyone on the waterfront is equipped to both use and potentially create the web-based technologies and applications of the future.”

As part of their monthly condo fees, residents will pay $60 for unlimited 100 megabit per second internet service, neighbourhood-wide Wi-Fi, and access to a unique community portal service, which will be developed to reflect local needs and interests.

The network will be “open-access” and residents and businesses will be able to choose from different content and service providers for internet, high-definition and internet protocol television, telephone, safety and security systems and more.

“This open, robust community-wide infrastructure will make the waterfront a living laboratory that encourages and supports innovation,” said Campbell. “The network we are building will enable the development of smart buildings, smart healthcare and smart education. Plus it can support new applications that promote better public safety and traffic management.”

According to Beanfield Metroconnect, the firm has built and currently operates a fibre-optic network in downtown Toronto that provides service to more than 200 commercial buildings.