“Most importantly, we need to keep the pressure on and keep the dialogue open. No more delays. It’s time for action.” 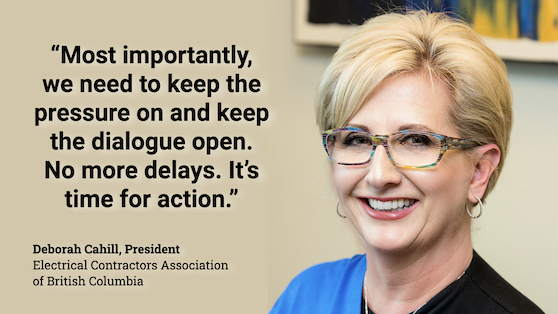 December 3, 2021 – You would think something like getting paid in a timely manner for the work you did is a no-brainer.

Unfortunately, this has not been the case across Canada’s construction sector and, naturally, frustration has been building to epic levels.

The struggle in British Columbia

“Our members definitely want legislation to be put in place as soon as possible,” says Deborah Cahill, president, Electrical Contractors Association of British Columbia. “For every day that we delay, our members are having to spend precious time and resources to chase down payments for work that they’ve already done. And that has a significant effect on our members.”

“They’re perhaps not able to finance the next job, or they’re unable to hire new staff,” Cahill continues. “It limits their ability to expand their businesses and support their communities, because they’re having to finance their own jobs. They’ve done the job, they’ve paid their employees, they’ve bought the supplies… yet they haven’t been paid.”

In fact, promptness of payment is already identified in construction contracts, Cahill notes, “yet, it seems to not be working”.

While there’s always the Builders’ Lien Act for seeking payment remedies, she points out it usually “comes out at the end of a job, when things have gone completely sideways, and it’s holding up payment for everyone”.

“Prompt payment legislation is more proactive; it gets in front of the problem, hopefully preventing things from going sideways,” Cahill notes.

“So when you take a look at the compound effect of that on any individual or company—no matter whether it’s large or small or medium—that limits them. I’m pretty comfortable in saying that our members just want this legislation to go through as fast as possible,” she affirms.

There have (finally) been a few wins for construction contractors in recent years.

Promptness of payment and a new adjudication process came to Ontario with the passage of The Construction Lien Amendment Act, 2017 (a.k.a. Bill 142). It was, without a doubt, a long, hard-fought road.

Next year, the Builders’ Lien (Prompt Payment) Amendment Act, 2019, will be proclaimed into force in Saskatchewan. “Although the legislation is not perfect—and there are a few sectors that are exempt from this law, such as mining—it is a huge step forward,” said Mark Cooper, president & CEO, Saskatchewan Construction Association.

But there are still hiccups.

In Alberta, Bill 37: The Builders’ Lien (Prompt Payment) Amendment Act, 2020, received royal assent on December 9, 2020, and will come into force on proclamation. However, at last check, Service Alberta was still “working with construction industry stakeholders to finalize regulations by February 2022, and bring prompt payment legislation into force by July 2022”.

In Nova Scotia, according to the Prompt Payment Nova Scotia Coalition, former Premier Stephen McNeil made a commitment to introduce prompt payment legislation in the legislature’s Fall sitting in 2020, but that was delayed due to Covid.

It does not look like there’s been any movement on that front.

On the national front, the Federal Prompt Payment for Construction Work Act received Royal Assent in June 2019. But, according to Chris Atchison of the BC Construction Association (BCCA), the regulations are still being drafted.

Finally, among those hiccups is British Columbia, where ECABC recently partnered with the BC Construction Association and Mechanical Contractors Association of BC “to bring the voices of subcontractors to the Government of British Columbia” via several Town Halls in an effort to move the needle.

Frustrated voices at BC Town Halls

“Prompt payment is about the sustainability of construction,” said Atchison, setting the stage. He noted that while BC introduced lien reform in 2020, it did not address prompt payment. “From our perspective, we see the government waiting. We started back in 2014, and there is no visible progress.”

Leduc’s background in prompt payment stems back to 2011. Back then, he was asked by Electrical Contractors Association of Ontario (ECAO) to look in to the issue. Eventually, prompt payment was introduced as a Private Member’s Bill, but that motion died after an election. Finally, the Reynolds Report was completed, and Ontario passed the Construction Lien Amendment Act, 2017.

At the Town Hall, Leduc encouraged BC to learn from Ontario and the Reynolds Report, which studied numerous other jurisdictions and, basically, have already done all the homework. “We got adjudication from the U.K.; we got prompt payment from the U.S.,” said Leduc.

Since prompt payment came into force in Ontario, Leduc says he has not heard any bad news. “People are just quietly rolling with it,” he said. “Some companies—mainly based in other countries—are still paying late, but they offer a premium for this.”

“I’ve seen people start new companies because they now have cash neutrality,” Leduc added. “My electrical and mechanical clients are happy. They are hiring more.” GCs, meantime, want to avoid problems, so they communicate better with other parties. “People are getting along better.”

It sounds as though prompt payment is “working” in Ontario. Nyvall, unfortunately, was of the mind that the issue requires more studying, more monitoring, more… everything!

Despite assuring attendees that both the Premier and Attorney General recognize there is a problem, Nyvall insisted “We want to make sure we get things right. We don’t want to pass legislation that doesn’t achieve its goal [of] people getting paid promptly”.

According to Nyvall, BC is ready to act… but he would feel a lot better about Ontario’s prompt payment roll-out if he had “clear evidence from Ontario, not just [that] we believe it is working”. He added that he is also considering using a federal adjudication body rather than developing one in the province.

“If we can learn from other provinces and find ways to encourage payment and/or utilization of adjudication, then we might leapfrog other provinces,” Nyvall said.

So, BC’s Office of the Attorney General wants facts, figures, ad nauseum, to ensure it develops the perfect legislation. Does such a thing even exist?

The overwhelming opinion of Town Hall attendees, however, was to stop studying—stop waiting—and to legislate something.

So why the hold-up? Why does it seem like government is sitting on its hands?

“That’s the million-dollar question, figuratively and literally,” Cahill says. “I was pleased to hear from Tyler [Nyvall] that the Premier and the Attorney General are both familiar with what’s going on, and they seem to be interested in moving this long.”

“They’re not denying that people deserve to be paid on time, so I’m not really sure what the hold-up up is.”

“The most important thing is that we have a model from Ontario that we are able to take a look at. We don’t have to reinvent the wheel, and the legislation doesn’t have to be perfect… we just need to put it in place,” Cahill affirms.

At one of the other Town Halls, Nyvall spoke of putting together a working group, and will be seeking more information from Leduc. Cahill is encouraged by this.

“Most importantly, we need to keep the pressure on and keep the dialogue open,” Cahill says. “No more delays. It’s time for action.”

To that end, it takes voices—lots of voices—to get government moving, and you don’t need to be a member of ECABC, MCABC, BCCA, etc., to help.

Write your MPP, write the Office of the Attorney General, write the Premier. Let them know that this is not a niche problem, and it needs a remedy.

• BC Office of the Attorney General.

• Office of the Premier.

“Or contact us at ECABC, and tell us your story,” Cahill says. “The more stories I have, the better I can share true facts and true incidents that are happening in our industry, and that need to be acted on now. Not not three years from now. Not five. Now. The time is now.”

A few weeks after the Town Halls and our conversation with ECABC, Cahill reported that the Select Standing Committee on Finance released its Report on the Budget 2022 Consultation, “and we’re pleased to let you know that the prioritization of prompt payment legislation is included in their list of recommendations to the Executive Council”.

“While this is a positive sign, we will continue to apply pressure to get this over the finish line,” added Cahill.