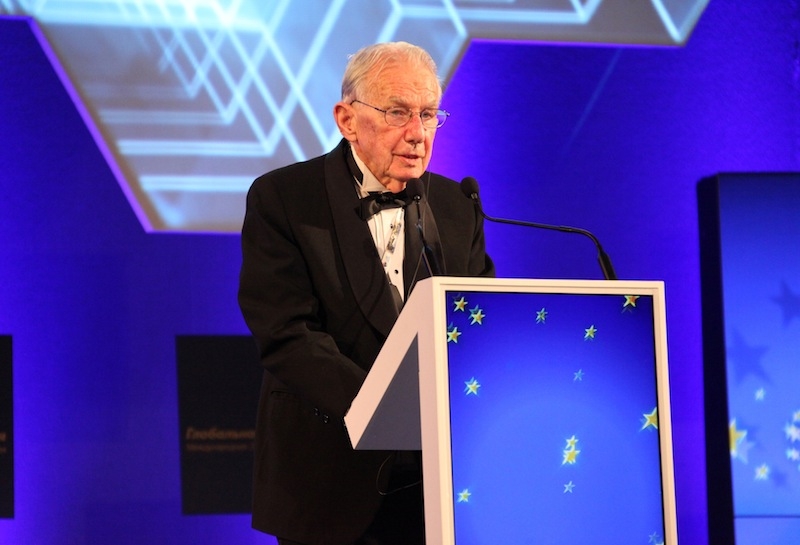 December 8, 2011 – The Global Energy Prize (an award in energy science) is now accepting nominations for its over $1-million 2012 award. The prize will be given to the winner by the President of Russia in an official ceremony during the St. Petersburg International Economic Forum in June 2012.

The Global Energy Prize annually rewards innovation and solutions in global energy research and its concurrent environmental challenges. “The degree to which a development contributes to the benefit of humanity is a key driver in deciding the recipient of the prize,” says the prize body. The prize has become increasingly important as governments, energy companies and consumers all seek to address existing and projected energy shortfalls.

“My reaction to the news that I had received the Global Energy Prize was a mixture of delight and complete surprise,” said Dr. Arthur Rosenfeld (USA, in photo), laureate of the Global Energy Prize 2011. “My reputation among Americans and other Westerners is fairly well established, but I am almost unknown among Russians who have, until President Medvedev, not paid much attention to my chosen field of efficient use of energy. Thus, my selection suggests to me a very flexible process in which Russians are putting a new emphasis on modern energy and environmental policies.”

The award was established in Russia through the non-commercial Global Energy partnership and with the support of Russian energy companies Gazprom, FGC UES and Surgutneftegaz. Laureates are presented with their award by the president of Russia.

Applications are being accepted now and will be accepted through February 29, 2012. Candidates can only be nominated by the highest-rated scientists, such as Nobel Prize laureates for physics or chemistry, past laureates of the Global Energy Prize, and laureates of the Kyoto, Max Planck, Wolf and Balzan prizes.

The winner of the 2012 prize will be selected by an International Prize Award Committee, which includes 37 internationally based scientists and specialists, as well as representatives of international research organizations. The award will be given for outstanding achievement in the field of energy, including:

Since its inception in 2002, The Global Energy Prize has been granted to 24 scientists from around the globe, including past laureates from the U.S., Great Britain, Canada, France, Germany, Iceland, Russia and Japan. The President of the Russian Federation participates in each year’s award ceremony held at the conclusion of a week-long celebration of the awardees’ work: Laureates’ Week. Other world leaders who have supported the prize include the former U.S. President George W. Bush, former British prime ministers Tony Blair and Gordon Brown, former French President Jacques Chirac, and current Canadian Prime Minister, Steven Harper.

Enquiries regarding nominations should be made by email to nomination@ge-prize.org