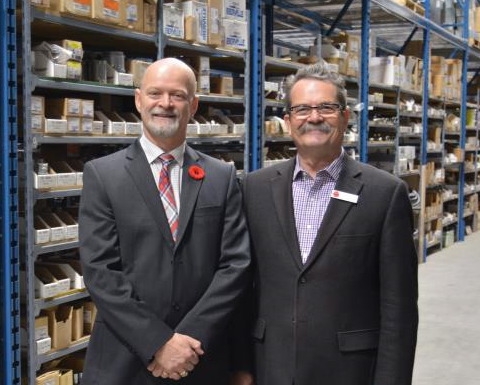 The distributor announced the gift at the grand opening of its new location in West Kelowna on November 3. President Robert Whitty presented the cheque to Steve Moores, Okanagan College’s Dean of Trades and Apprenticeship, saying, “Bartle & Gibson is proud to make an investment in the training and education of the industry’s future electricians and plumbers”.

“When a well-respected company like Bartle & Gibson makes the choice to invest in skills training, it instils confidence in our students knowing the industry supports their educational choices,” said Moores.

“Our customers, manufacturers and employees have helped us grow our footprint in the Okanagan,” said Whitty. “Investing in the region is our way of thanking them, and showing our commitment to the region today and well into the future through our partnership with the college.”

The trades complex project involved a 10,000 m2 renovation and expansion that included building a new 3-storey learning space and modern workshops, as well as retrofitting and upgrading existing facilities.