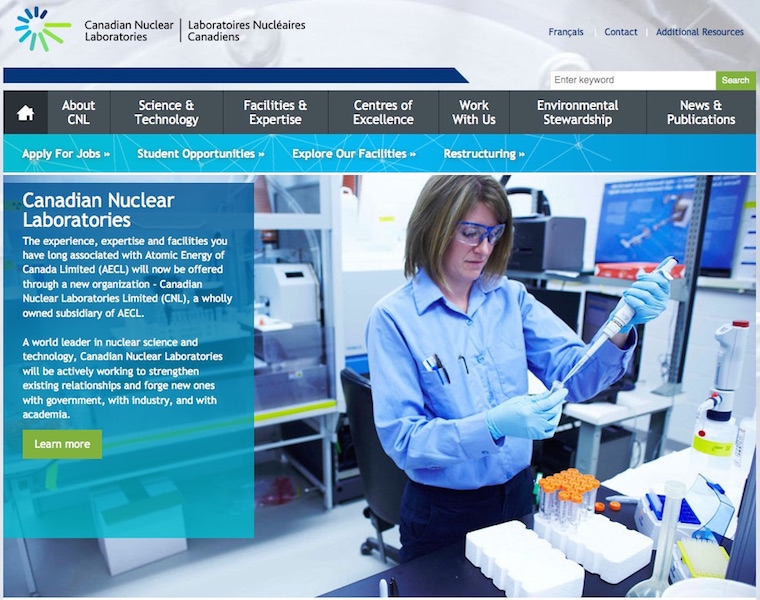 “This is an exciting time for Canada’s nuclear industry,” said Dr. Robert Walker, AECL president and CEO. “It’s also an important moment for our host communities in the Ottawa Valley, Pinawa and Port Hope, whose ongoing interest and stake in the restructuring project is greatly valued.”

The organization employs about 3400 people at 12 locations across Canada. The corporate HQ and core R&D operations will remain situated at Chalk River Laboratories in the upper Ottawa Valley. AECL says the new subsidiary will continue “to develop highly qualified people, and will be a source of highly skilled jobs and a key driver of local economic benefit in the communities where it operates”.

“CNL may be a new organization, but it stands on the shoulders of a Crown corporation with a proud history that spans over six decades of cutting-edge nuclear science and technology,” said Walker. “This new model of operation will capitalize on burgeoning market opportunities and private sector management, opening up a promising new era before us.”

• Managing Canada’s radioactive waste and decommissioning responsibilities accumulated during the more than 60 years of nuclear R&D at the Chalk River and Whiteshell Laboratories.
• Ensuring that Canada’s nuclear science and technology capabilities and knowledge continue to support the federal government in its nuclear roles and responsibilities.
• Providing access to industry—on a commercial basis—to address its need for in-depth nuclear science and technology expertise.

Background
In 2013, the federal government announced its intention to implement a Government-owned, Contractor-operated (GoCo) model for the management of AECL’s Nuclear Laboratories.

The implementation of this model involves two steps:

1. The creation of CNL as a subsidiary of AECL, to be operated largely with the governance, management systems and workforce that have been in place under AECL. On November 3, CNL will assume full responsibility for all day-to-day operations of AECL sites.

2. The second step occurs at the conclusion of the Government’s procurement process to select the GoCo contractor, when the GoCo contract is awarded and ownership of CNL is transferred from AECL to the contractor. Transfer to the GoCo contractor is anticipated in Fall 2015. At that time, CNL will become a private-sector entity, and AECL will be a small Crown corporation focused on the management and oversight of this contract.

AECL will oversee the performance of the contractual obligations of the contractor. It also retains ownership of the Nuclear Laboratories’ physical and intellectual property assets and its liabilities.

More information can be found on November 3 at www.aecl.ca or www.cnl.ca .