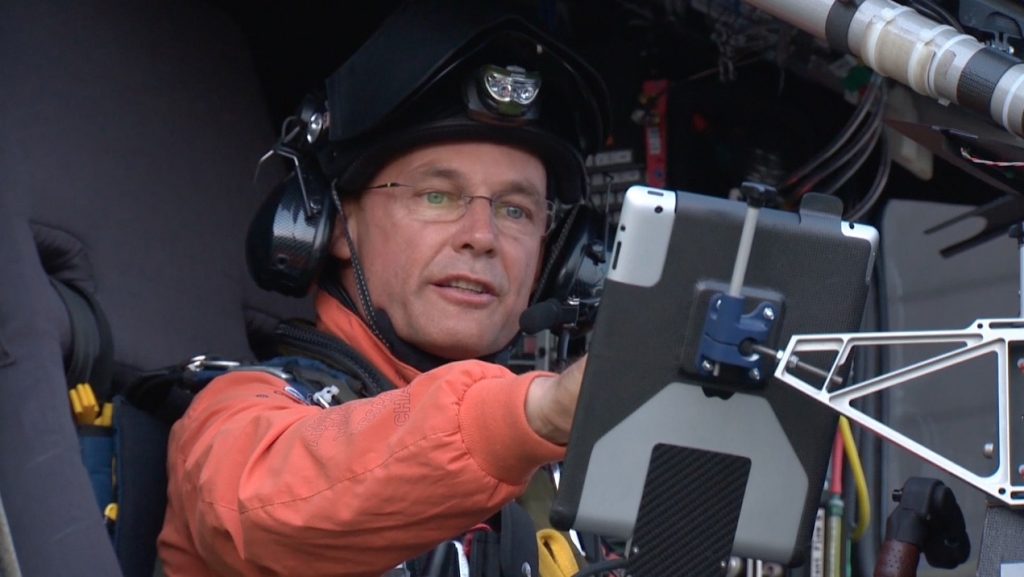 August 11, 2016 * (updated November 9, 2016 with gallery) – “As you can imagine with such a challenging project, there were many moments where we were nervous, where we were tense and said ‘Will it really work?’,” admitted ABB CEO Ulrich Spiesshofer upon the historic occasion of its alliance partner Solar Impulse 2 (Si2) completing the first ever round-the-world flight powered only by energy from the sun.

Back in January 2015, ABB formed an innovation and technology alliance with Si2 to help Bertrand Piccard and André Borschberg achieve this milestone. Si2 is a zero-emission electric and solar airplane, capable of flying day and night without fuel. Starting March 9, 2015, and ending July 26, 2016, the pilots flew a total of 43,041 km in 23 days over a 17-leg journey.

Si2 is a flying laboratory of “clean” technologies. Made of carbon fiber, the single-seater aircraft has a 236-ft wingspan and weighs 5100 lb. The 17,248 solar cells built into the wing power four batteries (38.5 kWh per battery) that, in turn, power the four electric engines (17.5 hp each) and propellers. The plane is capable of saving energy generated during the day so it can fly throughout the night on batteries.

“This will be a landmark project that demonstrates energy efficiency, renewable energy [and] lightweight construction can be taken beyond limits that mankind would have perceived,” said Spiesshofer proudly. “It demonstrates clearly that, with pioneering spirit and clean technologies, we can run the world without consuming the earth.”

“It’s a historic first for renewable energy and clean technologies [and not just] for aviation,” said Piccard. “By combining their respective strengths, Solar Impulse and ABB were able to show how breakthrough innovation can be transformed into credible solutions, and how energy can be more-efficiently produced, stored and used to create a cleaner world.”

“Because what we try to do at Solar Impulse is to demonstrate how clean technologies can be used to achieve the impossible,” he added.

To attempt the flight, Solar Impulse had to confront the same challenges people face on the ground, such as maximizing the power yield from solar cells, integrating renewable energy into the electricity distribution systems, and improving energy efficiency.

“Solar impulse is a flying microgrid,” said Spiesshofer. “You have renewable power generation, you have storage, you have control…”

“The mission would not have been possible without the expertise and support of ABB and other organizations that contributed to the project,” said Borschberg. “As part of its innovation and technology alliance with Solar Impulse, ABB provided experts to support the mission, including engineers who served as embedded members of the ground crew throughout the round-the-world flight.”

During its flight, Solar Impulse made stopovers on four continents (Asia, North America, Europe and Africa), and flew across two the Pacific and Atlantic oceans, as well as the Mediterranean Sea and Arabian Peninsula. On the way, it set several new aviation records, including that of the longest solo duration for an airplane (117 hours, 52 minutes) achieved by Borschberg on the leg from Japan to Hawaii, and the first crossing of the Atlantic Ocean in a solar airplane achieved by Piccard.

“And it’s clear that if we can flight day and night with no fuel, it means that these technologies are mature,” said Piccard.