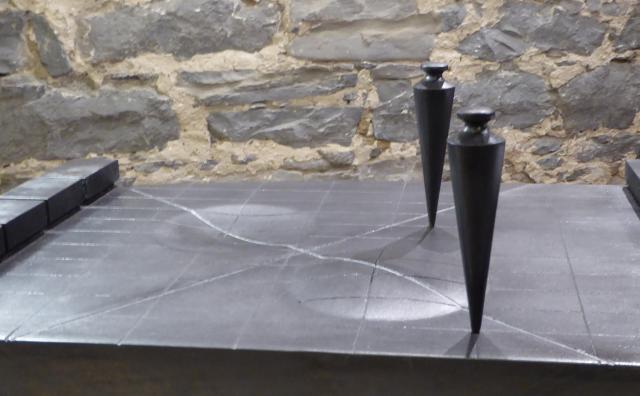 February 1, 2016 – Canada’s Building Trades Unions (CBTU) has named sculptor John Greer and architect Brian MacKay-Lyons as the winning design team for the Canadian Building Trades Monument, which will be built in Ottawa.

“This special monument will be a tribute to the men and women who work so hard to create safe and beautiful environments where we live, work and play,” said Mélanie Joly, Minister of Canadian Heritage. “National memorials are important because they reflect the rich and diverse history and accomplishments of Canada’s people.”

Slated for installation in 2017, the monument will be built in Canada with Cambrian black granite, quarried in Quebec. Its most prominent feature will be a pair of oversized plumb bobs. It will also feature 14 tools, to be chosen by the 14 different trade unions sponsoring the monument, each of which will choose the tool that is iconic for their membership.

The monument will be located across from Parliament in Major’s Hill Park on a site overlooking the Ottawa River. The site will be a place to celebrate the great achievements of this nation’s many skilled building tradesmen and women, says CBTU.

“Building is the most optimistic of human acts. This monument celebrates and honours the Canadian building tradesmen and women who construct the world around us. As you enter this place, you are invited to reflect on their accomplishments and on your role as a participant,” said the design team in describing their proposal.

“Choosing one team from so many excellent submissions was difficult, but we believed deeply in the winning team’s skill as craftsmen, the sculpture’s exceptional quality and its layers of meaning, which will be symbolic of the foundational nature of our work, our sacrifices, and our strengths as builders. It will be built to last,” said Robert Blakely, CBTU COO.

The Government of Canada, through the Department of Canadian Heritage and the National Capital Commission, is providing the site and facilitating the development of the new monument.