“In terms of installation, it’s not difficult for the contractor, especially when they have controls knowledge.” 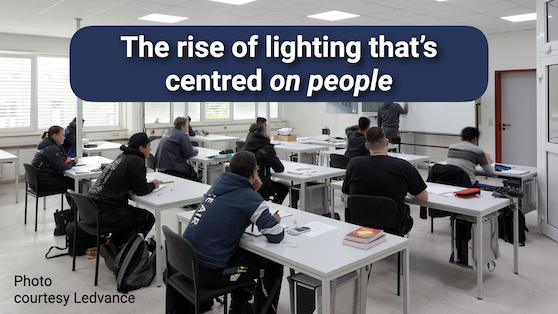 July 6, 2021 – We’ve seen several sea changes in the lighting sector over just a few short years. These days, energy-efficient LED lighting is no longer news; in fact, on those rare occasions when someone pitches me an article discussing the energy efficiency of LEDs, I reply with “Tell me something we don’t already know”.

Yet innovations around LEDs march on, and human-centric lighting (HCL) is one of them. I have an idea of what this could mean (as do you, probably, based on the name), but I was interested to learn more about this trend, and what it means to our health and well-being—not to mention opportunities for the electrical community.

I turned to Linda Conejo, luminaire sales manager with Ledvance, the maker of Sylvania general lighting in Canada. She’s been with the company for some 20 years, and is Lighting Certified by NCQLP (National Council on Qualifications for the Lighting Professions).

Considering she started in quotations, Linda’s learning curve was a sheer 90-degree vertical. “And it was incredible, because I didn’t realize I would actually get passionate about light and lighting”.

Linda has seen a lot of changes in the lighting market in that time. “For a long time, there were T12s,” she recounts. “Then, with electricity costs going up, we started seeing offices, schools and universities switching from T12 to T8. Manufacturers would increase efficiencies to get more energy-efficient products out to market, but nothing was as dramatic as LED implementation into general lighting.”

She explained you could enjoy energy savings of around 25% by switching from T12 to T8—even more with really good T8s!—but then LEDs took off.

“You would see 80% energy savings, and people thought that was incredible,” Linda remembers. “And you could control LEDs better than a lot of other technologies, like HPS (high-pressure sodium) or MH (metal halide). You could have Instant On, you could dim down, then go to full brightness quickly.”

LEDs even transformed the way lighting was designed. “We were able to start putting light in places we didn’t think to before. LEDs opened our eyes to different possibilities that we did not see before with traditional products.”

“The crux of human-centric lighting is right there in the name: lighting that is centred on people. That means designing light, or lighting systems, with people in mind,” Linda explains. But how, then, does HCL differ from our past and present lighting approaches, which have always had people in mind; that is, giving us the ability to see in the dark.

“HCL is a different way to look at lighting a space, in which people are your main focus. Light affects us visually, yes, but also emotionally and biologically,” Linda says. “So HCL provides targeted and long-term support for people’s health and well-being—as well as enhanced performance—through holistic planning and implementation of the visual, emotional and primary biological effects of light.”

“With human-centric lighting, you’re going to employ different colour temperatures and illuminance in the middle of the day—when you want it to be brighter—because that’s the best time for focusing on tasks and getting your work done,” Linda continues. As the day wears on, HCL turns to a warmer hue to coincide with our internal clocks, which are telling us to start winding down. “So you can adjust the colour of the light and its intensity throughout the day.”

Altogether, HCL sounds very touchy-feely, but it proves its worth both anecdotally and scientifically. “In Canada, daylight hours are short during the winter, and when it’s a sunny day, everyone seems to be in a better mood,” Linda notes. “We seem to have more energy, and it’s because of all the natural light that we’re getting… say 100,000 lux versus only 10,000 lux on a cloudy day”.

“There have been studies showing people who work the night shift have a really hard time losing weight and sleeping well, and experience more stress and higher depression because their biological clocks are all messed up,” says Linda, noting HCL can help address these problems.

And HCL’s benefits go beyond just night-shift workers. “I’ve seen HCL’s benefits first-hand. My father-in-law has dementia and, like many others in his condition, he gets really agitated near sundown. If you can prepare them with a light that brings them to a state of relaxation—instead of having the same light throughout the whole day—it will allow them to function better.”

Ultimately, human-centric lighting is more natural and “it’s going to make you feel better”, Linda continues. She points to now-common advice for avoiding your phone or other screens before bed because the blue light will negatively impact your sleep cycle. “If you’re not sleeping, you’re not going to be productive. You’re not going to be able to focus, you may make more mistakes…”

So, in essence, if lighting’s sole purpose is to help us see something, say, on our desks, then any form of lighting will do. But when we want to truly flex the potential of LEDs and controls, we end up with lighting that also benefits our minds and bodies. And with the emphasis on mental health these days, human-centric lighting seems a good step in the right direction.

Do we know good lighting when we see it?

One interesting thing to come out of the pandemic is that people’s opinion of what constitutes good lighting often changes.

“I was recently at a call centre site, and its employees were returning to the office after having worked remotely for many months, and they found the office too bright. After working at home for so long, they got used to lower light levels. But what many people may not realize is that we do require higher light levels during the day,” Linda says.

“But with a lot of the systems that are in place in office towers, universities and schools, it’s a constant high light level throughout the entire day. Which may be OK between 11 am and 2 pm, when you’re most productive, but that high level at 8 am, for example, may have an adverse effect on your productivity for the day.”

Many things look good on paper and work perfectly in the lab until you deploy them, so I was curious to learn whether HCL had been deployed anywhere in the market long enough to see discernible benefits.

“There is quite a bit of data out in the market. The property manager CBRE has implemented some human-centric lighting in different ways, and they’re gauging the positive effects it may have on employees in their offices. They conducted a poll, and 78% of participants felt more energized, 66% felt happier, and 52% felt healthier with human-centric lighting.”

In a 2015 study, Kearney discovered absences and sick leave went down 1% under HCL, and retention was increased by one year. In European classrooms that have deployed HCL (elementary up to university), students achieved 14% higher scores, Linda adds.

“I’ve worked with schools throughout the province, and some will say ‘We have to go with 4100 K’ while another says ‘We’re going to do 3000 K in our schools’, but imagine they had human-centric lighting capability within their classrooms that changed all by itself throughout the day?”

What constitutes an HCL solution?

When an electrical contractor’s client says “I’ve been reading about HCL, and I want it in my classroom” what is the contractor looking at? What are the components that make up a human-centric lighting solution?

“Basically, a human-centric lighting solution is a control system. First, you need the right luminaire; one with extra LED chips on board so it can change colour from, say, 2000 K all the way to 6500 K,” says Linda. “Then you have a control aspect that is attached to the fixture, which then communicates with the controller or the wall pad. That’s basically all you need for an HCL system in a room.”

“In terms of installation, it’s not difficult for the contractor, especially when they have controls knowledge. A lot of electrical contractors have installed some of these lighting control systems for entire buildings, and it’s basically a control unit that you attach to the fixture that speaks directly to the controller on the wall,” Linda adds, noting both wired and wireless solutions exist in the market.

A whole building would be a little more complicated, she says, and would likely involve an expert in controls for whole-building, floor-by-floor, and zone controllability.

Are we too focused on energy?

You’ll get no argument from Linda that energy efficiency is important, but is it the end all and be all?

“I think we sometimes focus too much on energy and end up not lighting our spaces well enough,” Linda muses. “If we don’t have enough light during the day, it affects our melatonin levels. When our melatonin levels fall too low, we don’t sleep well. Then we’re tired, sluggish, or listless the next day, and we don’t perform as well as we can. And if someone’s feeling anxious or sluggish, they’re more likely to call in sick, right?”

Which translates into lost productivity which, like energy spend, is a crucial metric that should not be dismissed.

“So we have to watch energy, obviously, but we also have to make sure we’re getting enough light. It’s not only about energy savings.”

This article—along with other great content—appears in the June 2021 edition of Electrical Business Magazine. Even more back issues are located in our Digital Archive.