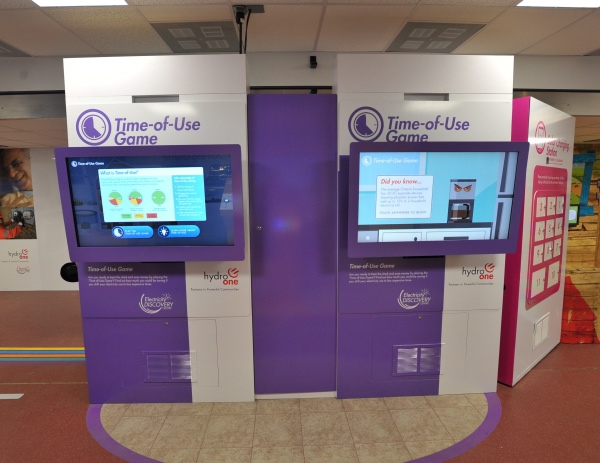 September 15, 2014 – Hydro One’s Electricity Discovery Centre (EDC)—which we first told you about November 2013—is celebrating its first anniversary this week. In its first year of operation, the EDC travelled more than 12,000 km to attend 28 fairs and events, and was visited by more than 27,500 Ontarians.

“Through the Electricity Discovery Centre we have been able to interact directly with customers, and they’ve told us this tool is valuable,” said Carmine Marcello, president and CEO.

The EDC is a 1000-sf mobile education trailer with interactive games and exhibits that explain Ontario’s power system, help customers manage their electricity use and costs, and educate children about electricity safety. It is staffed by ‘ambassadors’ who engage and educate visitors, offering tours through the various exhibits, helping customers with the various touchscreens, and answering questions on anything from understanding billing to modernizing outage detection and restoration.

One popular feature is the solar charging station, which allows visitors to recharge their tablets and smartphones. Children learn about electricity safety by meeting Ellie, the virtual leader of the Kids’ Electricity Safety Team, and becoming members by finding 11 electrical hazards around the home.

Wholly owned by the Province of Ontario, Hydro One owns and operates Ontario’s 29,000-km high-voltage transmission network, and a 122,000-km low-voltage distribution system.