“These legacy brands are a testament to our organization” 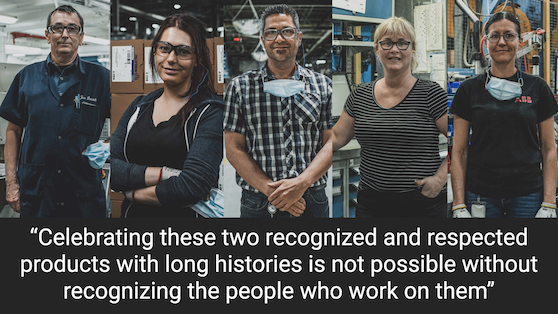 July 8, 2021 – Congratulations to Iberville and Microlectric, two of ABB’s Canadian legacy brands, which have been produced for some 100 years and 50 years, respectively.

“These legacy brands are a testament to our organization,” said Eric Deschenes, ABB Canada, adding that these products “had longevity built-in from the start”.

“They wholly support ABB’s philosophy of always adapting to meet customer needs—we’ve just made them better over the years. And the generations of employees who’ve worked on them contribute to that endurance every single day,” Deschenes added.

Iberville boxes and covers were first manufactured in Iberville, Que., and now at ABB’s St-Jean-sur-Richelieu facility (about 5 km from the original site). With an offering of over 180 different types of electrical boxes and accessories, the Iberville brand became part of Thomas & Betts in the early 1990s when it acquired Commander.

(ABB, meantime, completed its acquisition of Thomas & Betts in 2012.)

According to ABB, the Microlectric BP320 model is the first self-contained meter base in Canada that removes the need for external transformers owned and maintained by the local electrical utility.

“Celebrating these two recognized and respected products with long histories is not possible without recognizing the people who work on them,” says Alain Quintal, Installation Products.

“I have worked on Microlectric product assembly for 21 years and seen most—if not all—meter bases that were created,” said Ms Rolande Thibert, adding “[…] I am proud to play a role in creating something that I know is protecting the meter’s components from the harsh Canadian elements while also helping to protect buildings and homeowners through safe electrification technology.”

The steel used in both Iberville steel boxes and Microlectric meter base enclosures is sourced locally, says ABB, the largest employer in the region.