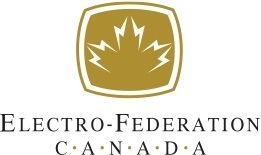 January 23, 2013 – Electro-Federation Canada aims to recognize the contributions made by individuals to the Canadian electrical, electronic or telecom industry at the community, regional or national level through its annual Industry Recognition Award.

EFC asks members to nominate a current or past member who has exhibited “outstanding leadership in the development and advancement of our industry”.

CLICK HERE to submit your nomination by March 15, 2013. Past winners include: