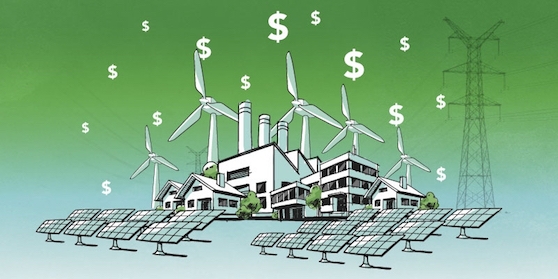 April 17, 2018 – Poor energy policy choices—including Ontario’s Green Energy Act—have increased electricity prices for residents, cost tens of thousands of manufacturing workers their jobs and produced only minimal health and environmental benefits, according to a new collection of essays published by the Fraser Institute.

“Ontario is a prime example of how not to manage energy policy; extreme government interference in the electricity market has made life more unaffordable for Ontarians and damaged the province’s economy,” said the institute’s Kenneth Green, a contributing author to “Understanding changes in Ontario’s electricity markets and their effects”.

Among the policies that have created Ontario’s electricity crisis is phasing out coal-power generation, granting wind and solar generators long-term guaranteed contracts above market prices, and the Global Adjustment charge that, in part, pays generators not to produce any power.

“Shuttering [coal-power generation] plants had very little effect on air pollution. Had the province simply continued with retrofits to the coal plants then underway, the environmental benefits of the shift to renewables could have been achieved at one-tenth the cost,” write the authors in their Executive Summary.

These policies have hurt Ontario residents and the economy in several ways:

• Residential electricity costs increased 71% between 2008 and 2016, more than double the national average increase of 34%.

• In 2016, Toronto residents paid, on average, $60 more for electricity per month than the average Canadian.

• Ontario’s high electricity prices reduced employment in manufacturing by some 75,000 jobs between 2008 and 2015.

And research has shown the Green Energy Act has not produced the environmental or health benefits—nor the green jobs—that advocates and the government promised, add the authors.

“The recent history of electricity in Ontario has been pain without gain for residents and businesses alike,” said Ross McKitrick, Fraser Institute senior fellow and economics professor at the University of Guelph. “Policymakers need to fully understand the nature of the bad policy decisions and their full effect before they can craft meaningful reforms that will actually lower hydro prices.”

Related
“Ontario’s Soaring Electricity Prices and How to Get Them Down”
Ontario’s Green Energy Act is a competition-killer, says Fraser Institute
Fraser study “misrepresents” cost of wind energy, says CanWEA
Ontario’s electricity planning “essentially broken down over the past decade”
Tags