News Personalities
PowerStream donates over $205,000 to United Way in 2016 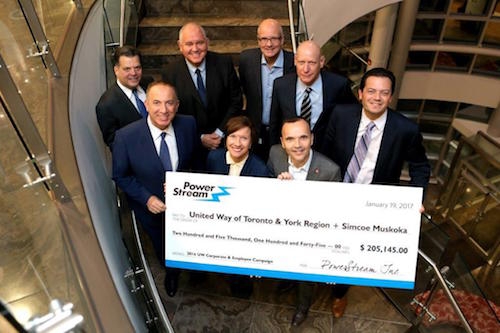 January 23, 2017 – PowerStream says its 2016 Employee United Way Campaign was one of the company’s most successful to date, resulting in a near record-setting donation of $205,145 that will be shared between the United Way Toronto & York Region and the United Way Simcoe Muskoka.

The company’s annual campaign includes a variety of employee-focused initiatives that help to raise funds for the United Way and its agencies. In 2016, the initiatives included payroll deductions, a corn roast, employee bingo, 50/50 draws and the company’s charity golf tournament.

“Being a leader in corporate social responsibility is something we value highly at PowerStream,” said Brian Bentz, president and CEO of PowerStream. “Further to this, our employees recognize the importance of giving a helping hand to those in need and our successful annual employee campaign is a testament to this.”