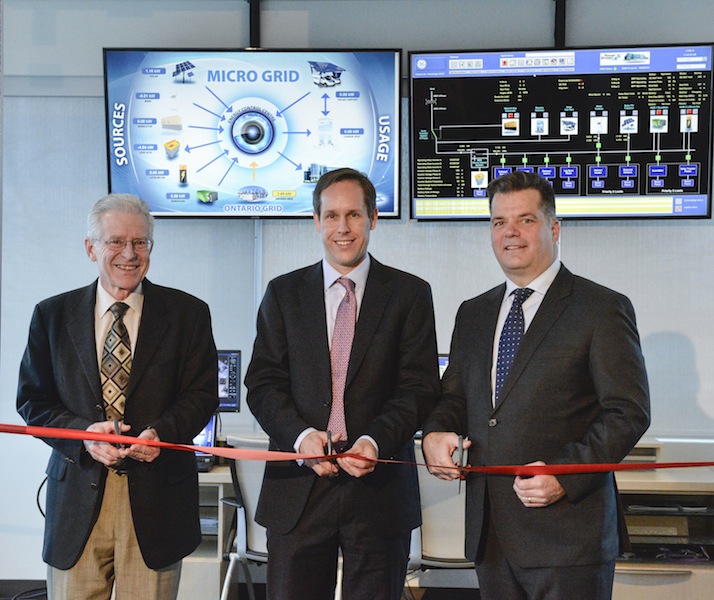 November 26, 2013 – PowerStream says it is providing a glimpse of how energy consumers may be able to go off-grid in the future through a micro grid demonstration project the utility officially unveiled today at the its head office.

PowerStream explains micro grids work in the same way as large-scale electricity delivery systems or a provincial grid but, instead of delivering electricity to hundreds of thousands or millions of customers at a time, they can be scaled down and customized to meet the needs of communities or even just one customer. Micro grids rely on a mix of clean and renewable sources of generation, and can operate independently or feed electricity back to the provincial grid.

Claiming it is among the first utilities of its size in North America to initiate a proof-of-concept trial involving this technology, PowerStream is using its demonstration project to evaluate a micro grid’s performance while it is connected to, and also disconnected from, the provincial grid.

The company believes micro grids will be an integral part of Ontario’s energy future, not only changing the way electricity is distributed, but also in providing an innovative solution to the challenge of asset renewal in large-scale electricity delivery systems, and demonstrating how renewable energy can effectively help to address the growing demand for electricity.

PowerStream is implementing its micro grid in two phases. In Phase One, currently in place, the company is drawing electricity from several sources (a solar array, a wind turbine, natural-gas generator and solar-assisted carport charging station, as well as lead acid, lithium ion and sodium nickel chloride batteries) to provide electricity for loads at its head office, such as lighting, air-conditioning and refrigeration, as well as to charge its fleet of electric vehicles.