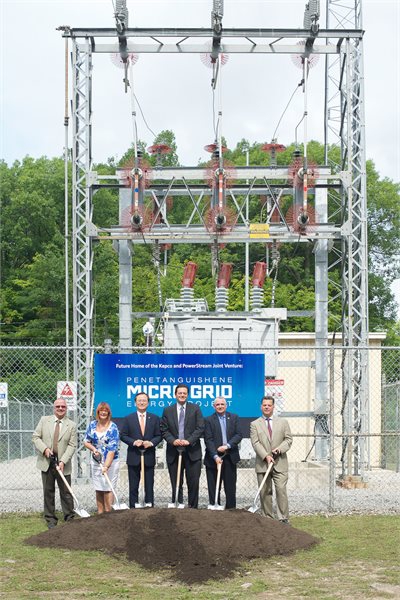 August 31, 2015 – PowerStream says it broke ground last week on the construction of a system that, when completed in 2016, will provide up to 11 hours of backup power supply for approximately 400 of the utility’s customers in Penetanguishene, Ont.

The Penetanguishene micro grid will be installed adjacent to PowerStream’s Robert Street Municipal Substation, located east of the town’s Main Street. It will be made up of two 500 kWh batteries as well as a 750 kilowatt power control system. It will also be connected to a distribution powerline that provides service to customers in an area of the town bounded approximately by Robert Street East in the south, Hill Top Avenue in the north, Lecarron Avenue in the west, and east of Centennial Drive.

The Penentanguishene micro grid will be able to operate either connected to the grid (grid mode) or disconnected from the grid (island mode), PowerStream said.

The grid will be operated from PowerStream’s System Control Centre at the company’s head office in Vaughan, Ont. with remote accessibility for performance monitoring via the internet by the company’s project partner, the Korea Electric Power Corp. (KEPCO).