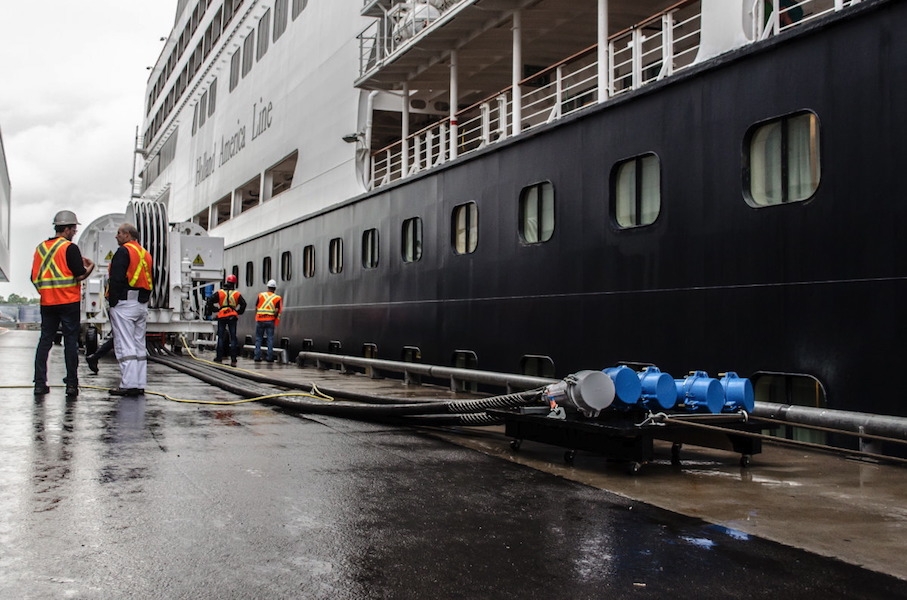 August 15, 2017 – The Montreal Port Authority’s (MPA) shore power project has been completed, which means vessels docking at the Port of Montreal’s new cruise terminal can be powered by electricity rather than their diesel engines.

This is the first green initiative of its kind in Quebec, says MPA, explaining the project was rolled out in two phases: the first was shore power for wintering vessels, and the second for cruise ships. In 2016, MPA developed four power supply stations at berths 25, 27, 29 and M2 for vessels that winter at the port.

As part of the rehabilitation of Alexandra Pier and the cruise terminal, MPA worked with its technical partners to have the necessary equipment installed to be able to provide a sufficiently powerful electrical supply for cruise ships.

To that end, Hydro-Quebec installed a new 25kV line to supply the new substation installed at the cruise terminal in 2016. For its part, Schneider Electric designed and built the equipment needed to install the electrical substation. Carried out in 2016 and 2017, this work led to a successful shore power connection to Holland America Line’s 719-ft long MS Veendam, which has a gross tonnage of 57,092 and a guest capacity of 1350.

The total project cost was $11 million. The Government of Canada is contributing up to $5 million under its Shore Power Technology for Ports Program. The Government of Quebec contributed $3 million under its program to improve marine, air and rail transportation efficiency to reduce GHG emissions (PETMAF en matière de réduction des émissions de GES). The MPA, for its part, contributed $3 million to the project.