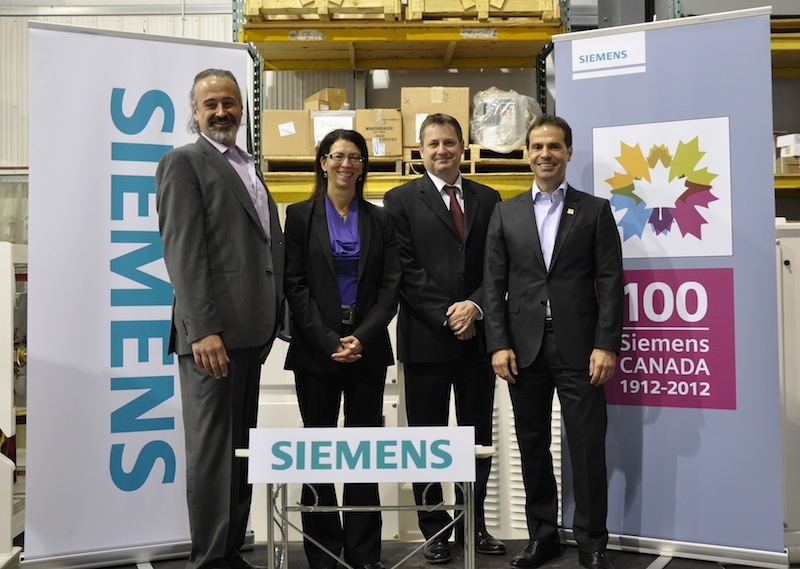 May 30, 2012 – Siemens officially welcomed Prairie West Technical Services into its family on May 17, hosting an open house at the newly acquired company’s Regina head office. More than 50 guests, including customers and employees, were in attendance to learn about Siemens’ current offerings, as well as be introduced to the expanded portfolio Siemens is now able to provide through Prairie West.

Jim Mayhew, director of operations at Prairie West, acted as emcee for the day, which began with remarks from Siemens Canada CEO Robert Hardt, who reaffirmed Siemens’ commitment to its customers and to the Province of Saskatchewan.

“We are here to grow, and to bring our entire portfolio of solutions to our customers in the West,” said Hardt. “Saskatchewan, and the West in general, is growing as a result of demand for its resources. The use of technology can help companies meet these demands—ensuring Canadian companies can keep a competitive advantage.”

“Siemens’ investment represents a second wave of economic development for the province—companies taking advantage of the supply-chain and value-added opportunities afforded by our rapidly growing resource economy. We welcome one of the world’s most well-known and respected corporate citizens to Saskatchewan.”

Guests enjoyed lunch and took part in tours of the plant facility, demonstrations, and a showcase of additional product offerings to support the Saskatchewan market.

The acquisition of Prairie West Technical Services was officially announced by Siemens Canada in November 2011 to support Siemens’ existing mining and oil & gas customers in Saskatchewan, and advances the company’s technical capabilities in the region. Prairie West specializes in engineering solutions for the utility, industrial, commercial and institutional electrical markets.