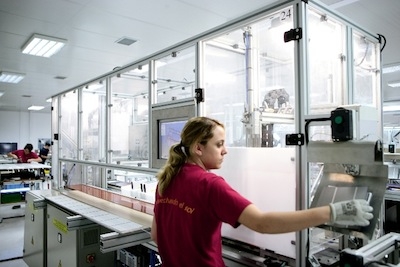 Siliken Canada Corporation has announced that it has leased a building near the airport of Windsor, Ont., where “hiring of people of all sets of skills has started, equipment is on the way, start of production scheduled for second half of April 2011.” Siliken’s president Carlos Navarro has previously announced the company’s commitment to Detroit’s twin city back in October, together with city mayor Eddie Francis and Windsor MPPs Dwight Duncan and Sandra Pupatello.

According to Siliken, it plans to gradually bring four complete production lines to Ontario, which by the end of the year would add up to 50MW of output capacity. The first lines were said to have arrived at the end of February.

The plant will also generate above 150 direct jobs in Windsor.

The PV modules produced out of Windsor will generate clean electricity at “the lowest long-term cost, equivalent to the consumption of about 19.000 homes,” in hopes of avoiding the emission of 40.000 tons of CO2 per year and the generation of 40 grams of highly radioactive residue.

The new plant will join the others the Siliken group currently runs in Spain, Romania and the U.S., and its output will be dedicated to the local demand for Ontario-made modules.

“With this manufacturing plant Siliken will be able to offer high quality UL-certified modules to Canadian developers and installers, as required in order to fulfill the Domestic Content Requirements stipulated in the FIT program,” it said.