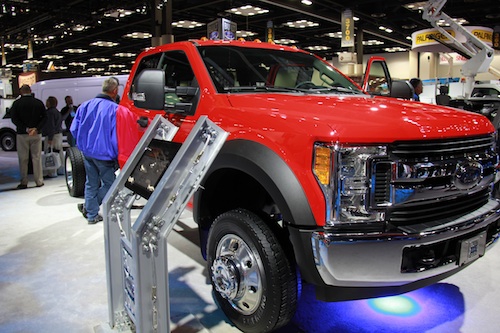 August 10, 2016 – The work truck. That rough-and-tough vessel that helps you get the job done. But it doesn’t end there.

These days there are more and more options for your office-on-wheels. Want a fuel-efficient four-cylinder for the in-city jobs? No problem. An engine with more hp and torque that can last the distance to the moon and back? Done. Heck, it can even be electric!

Whatever features you desire, you can be sure there was a truck for you at the Work Truck Show 2016, which EBMag attended earlier this year. Here is a roundup of some of the trucks that really caught our eye, and be sure to check out our May edition for truck accessories and visit EBMag.com for more photos from the show.

“And we’re out of here!” hollered show attendee Ed Wodalski out the window as he took off in the Mitsubishi Fuso Canter E-Cell during the Ride-and-Drive… and not a puff of exhaust  in sight.
The development of this all-electric, battery-powered, medium-duty cabover work truck is “well underway”, according to company staff based in Japan; it’s set for release in the Japanese market by 2017, with North America to follow shortly thereafter.

Mitsubishi Fuso Truck of America wrapped up a year of testing this past fall, and reports the E-Cell can generate a 64% savings in operating costs compared to an equivalent diesel-powered vehicle in the same service.

The trials also indicated these vehicles proved “adequate for everyday use in short range delivery and inner city transportation”. The trucks achieved a range of more than 100 km, Fuso says, and a payload of two tonnes.

The truck uses the same cab and frame as Fuso’s FE series, but the frame width has been slightly modified to accommodate the four 390V, 48.8 kWh, air-cooled lithium-ion batteries.

When the accelerator is released, current from the 110kW AC synchronous permanent magnet motor recharges the batteries as the truck drives, explained Fuso engineer Chris Burdett, giving it that extra amount of range.

E-Cell can be charged via:

In stark contrast to the plethora of white chassis models on display throughout the show, one of Ford’s new 2017 Super Duty options made its debut in Cherry Red.

Also paraded for 2017 models were a walk-through centre console and power running board options for Ford Transit; Sync 3 communications and entertainment system for Transit Connect cargo van and wagon; and the 6.2-L V8 engine available mid-year for E-Series stripped chassis and cutaway.

See more in our video at tinyurl.com/zua9guc.

Ram leans all the way left

Left-side PTO capability on its 4x4s is now available from Ram (previously only available on 4×2 configurations).

“This system will allow a shaft-driven accessory system where we can run multiple devices, like a generator and compressor off the PTO,” said Dave Sowers, head of Ram Commercial. “That eliminates two other gas-powered accessories at the worksite.”

“From an electrical perspective, we have an industry-exclusive vehicle system integration module that will allow the upfitter to tie into our electrical system in a seamless way without splicing,” Sowers said, elaborating on how Ram’s chassis cabs are upfitted “in a great way”.