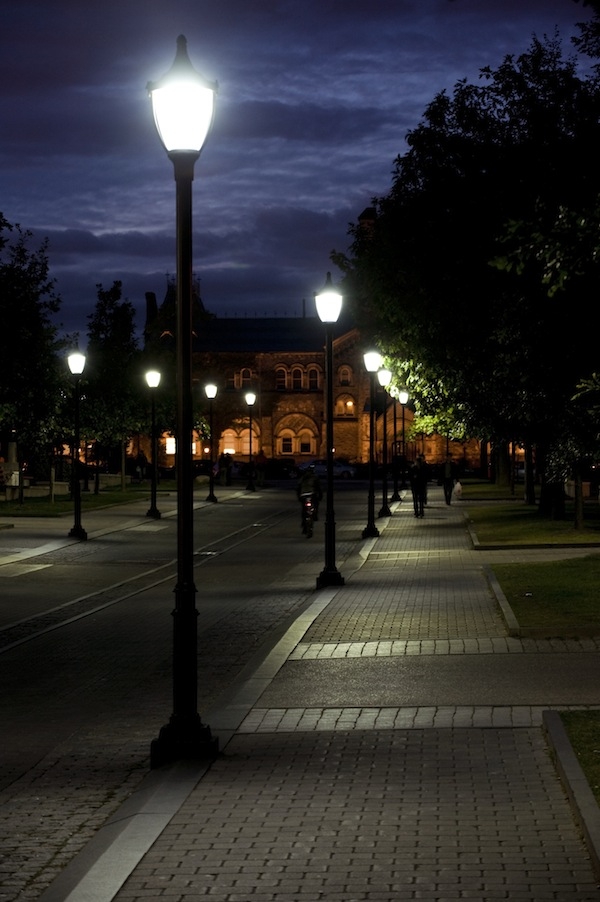 The University of Toronto main campus after retrofit.

November 9, 2011 – Established in 1827, the University of Toronto is one of Canada’s largest universities, offering more than 810 programs from three campuses across the downtown core and the Greater Toronto Area. Describing itself as being actively engaged in becoming an energy efficient and environmentally friendly institution, the university recently sought to improve the street lighting at its downtown campus.

The goal was to implement a complete street lighting solution to help save energy, reduce maintenance costs and decrease the campus’ environmental footprint, and to do so, the university enlisted the help of Osram Sylvania.

“We were really looking for a way to cut our energy consumption and reduce our labour needs without going over our budget,” says Blair Mochrie, University of Toronto trade services manager. “We have a great, long-term relationship with them, so we knew we were in good hands when we approached Sylvania.”

According to Osram, the first priority for the project was to preserve the look and feel of the school grounds. Since the main Toronto campus’ streets and promenades were already lined with 100 ornamental pole-mounted lights, retaining these existing fixtures was an integral part of keeping the campus’ balance of modern architecture and old world charm, it explains.

The solution
The school opted to install Osram’s LED Retrofit Kit for Outdoor Area Lighting, a street lighting system where the retrofit replaces HID technology with an LED light source without having to replace an entire fixture, says the company. It uses 40 watts to operate and takes advantage of the directional light distribution of 66 high brightness Golden Dragon Plus LEDs from Osram Opto Semiconductors, it adds.

“[It] allowed us to maintain a good looking white light over existing HID lamps that greatly reduced the system wattage, increased the system light levels and was easy to install,” says Mochrie. “I was very impressed with how the LED unit fit securely, like a glove, into our existing fixtures with no need for additional external modifications.”

The feedback
“Lighting typically accounts for over 20 percent of a campus’ total electrical consumption, so schools benefit greatly from an energy-efficient makeover,” explains Osram.

“This new LED Retrofit Kit is a perfect solution for campuses like the University of Toronto,” continues JR Salker, applications engineer for Osram. “The product offers huge energy-savings without sacrificing performance, safety or aesthetics.”

The University of Toronto is now reporting an annual energy savings of 48,180 kWh per year, equaling a 60% reduction or $4,818 per year. Additionally, the cooler colour temperature and 70 CRI of the LEDs installed have improved the quality and safety of the campus outdoor and area lighting, says the university.