Articles Features Women in Power Articles In-Depth Women in Construction
“We don’t want to be a blocker in [electrification]. We are a supporter!”

“We [just] want to ensure that it’s done safely, so we really want to be at the table.” 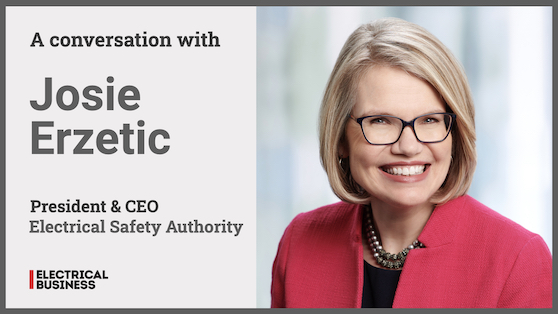 July 11, 2022 – Back in April 2022, Ontario’s Electrical Safety Authority welcomed Josie Erzetic as its new president & CEO. Prior to this appointment, she served as ESA’s chief regulatory officer and general counsel, and even hosted ESA’s podcast “Grounded in Ontario”.

After giving her some time to settle into her new role, we reached out to Josie to ask her about her priorities right now—and going forward—against the backdrop of the Ontario Auditor General’s “Value‐for‐money audit” (December 2020).

Josie proudly announces that, of the audit’s 25 recommendations (some of which contain two or more deliverables), ESA has completed about 78% of the deliverables as of the date of our conversation.

Our discussion wanders into Risk-based Oversight (RBO) territory to see how that’s working out for both licensed electrical contractors and ESA. (Josie says that, over the past year, ESA processed over 11,000 photos as part of its inspection process.) “So we’re able to divert and use resources much better on things that are higher risk,” she says.

We would have been remiss not to ask about ESA’s participation in the market with regard to the electrification of, well, just about everything.

“I am super excited about this,” she says. “I’ve spent most of my career in [the electricity] sector, and I just think it’s a fascinating time, and a time for everyone in the sector to really get excited about […]” is Josie’s stance, but with a word of caution. “We don’t want to be a blocker in [electrification]. We are a supporter. We [just] want to ensure that it’s done safely, so we really want to be at the table.”

We also get discuss industry relations—specifically ESA’s relationship with licensed electrical contractors (LECs) and master electricians (MEs)—and, of course, it wouldn’t be right to have time with Josie and not ask her about Grounded in Ontario and her experience as host of ESA’s podcast for LECs and MEs. (Spoiler alert: “I loved it. Actually, it’s been a lot of fun.”