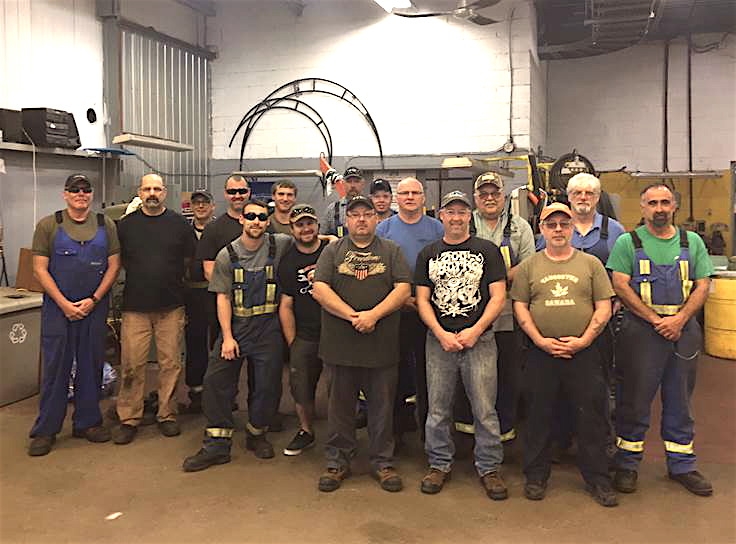 July 18, 2017 – Believe it or not, there hasn’t been a lost-time injury at Nova Scotia Power’s Milton Heavy Maintenance Shop since June 27, 1977. Congratulations!

“It’s an amazing accomplishment,” said Jamie MacDonald, senior director of Power Production. “The team at Milton does high-risk work, and they’ve proven that all injuries are preventable. They are an inspiration for all our teams at Nova Scotia Power.”

The Queens County shop directly employs 20 permanent and part-time workers, supported by a six-member planning and engineering group, and three administrative staff. They perform maintenance on hydroelectric generating equipment across the province. The generators date back as far as the 1920s so, at times, the Milton team must fabricate new parts from scratch because replacement parts don’t exist.

Components that can be moved to the Milton shop are refurbished there, but staff will travel to sites across the province to work on pieces that cannot be moved. The equipment they work on ranges from a few thousand kilograms to 140 metric tons.

“The shop consists of a very talented group of individuals,” said Scott Whynot, superintendent of Hydro Maintenance. “They are machinists, millwrights, welders and utility workers who work in situations that involve confined space, rigging and manipulation of large components, machining, welding and various other hazards. All of these hazards are mitigated on a daily basis by a strong safety culture.”

“The common thread that has brought this team to this achievement is the team’s respect for one another and their willingness to speak up to ensure their co-workers and themselves go home safely at the end of every day,” Whynot added.

— With files from Nova Scotia Power.