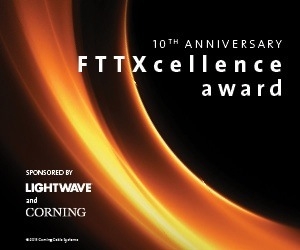 May 24, 2013 – Corning Inc. and Lightwave have kicked off the 10th anniversary of the FTTXcellence Award by opening nominations to honour an individual for leadership in the deployment of optical access networks in North and Latin Americas. The award will be presented September 30 at the FTTH Conference & Expo in Tampa, Fla.

“Corning is enthusiastic about recognizing visionaries who are generating momentum toward the ultimate goal of bringing fiber to as many business and residential customers as possible,” said Kim Hartwell, SVP and chief commercial officer for Corning Cable Systems.

To be eligible for the award, candidates must be nominated by a peer. Nominees may include individuals at carriers and system operators, home developers, utilities, municipalities or other organizations that have launched an FTTx project; individuals at vendors or research organizations whose work has benefited FTTx technology development; other elected officials or policymakers who have made a significant positive impact in the regulatory or legal arena; and other deserving individuals.

Nominations must be received by August 2, 2013.