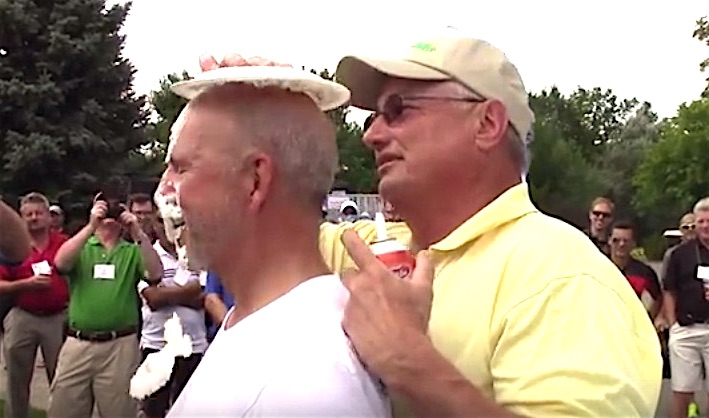 July 25, 2017 – The world has lost a real character… it is with sadness I learned about* the passing of Bruce Diplock—former president of Dixon Electric—this past weekend. He was 66.

Bruce passed away peacefully, July 22, 2017, at Health Sciences North after a short battle with cancer. The notice at Ranger’s reads:

Bruce is survived by his wife of 44 years, Lorraine (née Flear) and his children Jessica Diplock (Gord Turner), Bradley (Lisa) and Jonathon. Proud grandpa to his treasured grandchildren Joshua, Kate, Lucas and Alicia.

I met Bruce 8 years ago at the 2009 annual general meeting of Independent Electrical Distributors (IED) Limited Partnership II in Quebec City. There were drinks. There was joking. There are hazy memories.

But I remembered enough to make this note about Bruce in my Address Book, which simply reads:

Bruce Diplock. Fun guy to be around.

And he truly was.

As an example, check him out in my VIDEO Let them eat pie! (above), shot at the Power2Feed Pie Challenge in August 2015 (at about 1:44 mark), where he uses whipped cream to create a special headdress for Jim Milne.

To share your memories and pay your respects to Bruce’s wife Lorraine and the rest of his family, you are invited to attend a celebration of his life:

In lieu of flowers, donations may be made directly to the Northern Cancer Foundation.

* Thanks for sharing the news, EFC!