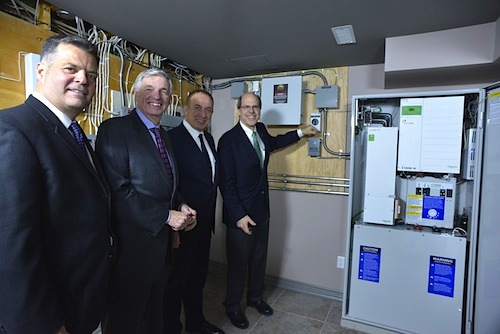 March 23, 2016 – PowerStream has launched a solar storage pilot that demonstrates how residential customers can simultaneously generate their own energy and work together as a virtual power plant to augment the grid.

On Tuesday, PowerStream unveiled PowerHouse in Vaughan, Ont., claiming it as Canada’s first virtual power plant. It uses an aggregate fleet of 20 residential solar and energy storage systems located at customer homes, which can be autonomously controlled through intelligent software to simulate a single, larger power generating facility.

The technology being used is a combination of rooftop solar PV panels and a lithium-ion battery installed “behind the meter” at a customer’s home. Customers will benefit from generating their own renewable energy and displace a portion of their energy from the provincial grid, which PowerStream says will lead to reduced exposure to peak electricity rates and significant bill reduction. The company also notes customers will have the added benefit of outage protection by using energy from a combination of on-site stored and generated solar energy.

PowerStream received grant funding from the Independent Electricity System Operator (IESO) for this project and partnered with Sunverge Energy and Robertson Bright (RBI) to build the initial offering.

“The IESO is committed to assisting in developing and implementing new energy technologies and services that will help utilities provide customers with more energy choices,” said Bruce Campbell, president and CEO, IESO. “PowerStream’s virtual power plant is one example of a new solution that we expect to have significant potential in Ontario.”