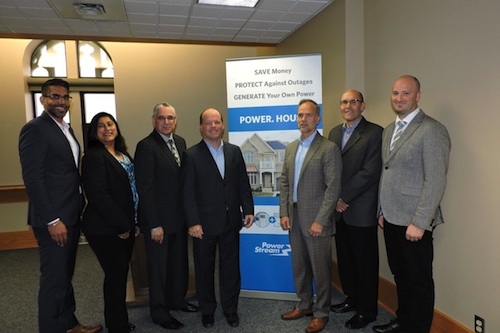 October 14, 2016 – PowerStream signed a partnership agreement last week with Thunder Bay Hydro that will allow the northern Ontario-based electricity distribution company to take advantage of a residential solar-storage technology currently being piloted with customers in York Region and Simcoe County under the program name “PowerHouse”.

“Our expansion of the PowerHouse initiative to other areas of the province through partnerships with other electricity distribution companies like Thunder Bay Hydro is the logical next step in our efforts to broaden the use of this technology,” said Maurizio Bevilacqua, PowerStream board chair and City of Vaughan mayor.

Bringing PowerHouse to the Thunder Bay area will also provide PowerStream with an opportunity to learn how the technology performs in northern geographies, the utility explained, where daylight periods are significantly longer in the summer and shorter in the winter.

PowerHouse technology can aggregate a fleet of residential solar and battery storage systems to form a virtual power plant (VPP). These systems can be autonomously controlled through intelligent software to simulate a single, larger power generating facility. It features a combination of rooftop solar PV panels and a lithium-ion battery installed behind the meter at customers’ homes that, according to PowerStream, “help to protect against power outages, off-set peak hour electricity prices to provide reductions on bills and reduce strain on the grid during peak system demand.”

For more on the pilot program, see our news item from earlier this year HERE.