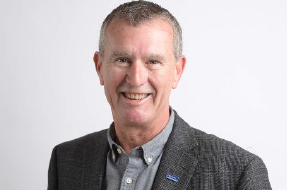 John has been a member of the company for over 43 years, starting as a shipping assistant in the warehouse of the Halifax branch in 1977. Over the years, he progressed through the Nedco organization, holding numerous positions in Halifax, New Glasgow and St. John’s with increased responsibilities, until being transferred back to Nova Scotia in 1991 as Halifax/Dartmouth Branch Manager, then Atlantic Division Sales Manager. In 2001, John was promoted to general manager of Nedco Atlantic. In 2015, Nedco and Liteco were amalgamated to form one entity, Rexel Atlantic.

Since the amalgamation, John has been a key member of the senior management team of Rexel Atlantic, and has been “instrumental in developing [Rexel’s] current e-commerce sales plans that positioned Rexel well for future growth”.

“Over the years, John has made a great contribution to the electrical industry. Hi dedication, knowledge and creative thinking led into many successful projects over the past years,” said Ramy Yousif, general manager of Rexel Atlantic, in a media release. “On behalf of the Rexel family, I would like to thank John for his many contributions to Rexel over the years.”