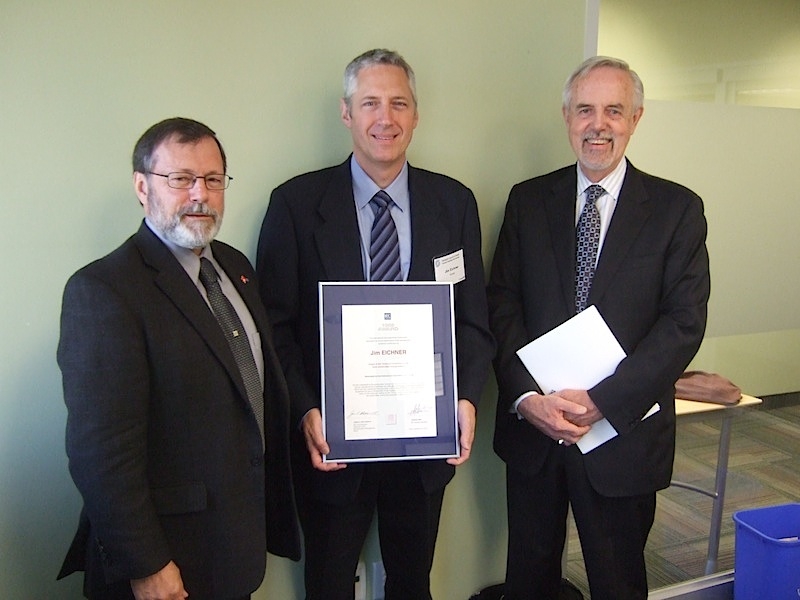 October 7, 2011 – The International Electrotechnical Commission (IEC)—a global organization that prepares and publishes international standards for electrotechnology—has presented Schneider Electric’s Jim Eichner with its 1906 Recognition Award. Named for the year in which IEC was founded, the award recognizes the exceptional recent achievement of experts; Eichner was a key contributor on two recently released product safety standards for photovoltaic power conversion equipment.

“Within our engineering and business teams in Schneider Electric’s Renewable Energies Business, we had already considered Jim Eichner an expert and mentor for best-in-class knowledge of standards and safety requirements,” said Mike Tobin, VP of engineering for Schneider Electric. “We are exceptionally proud of Jim’s contributions to the industry and very happy that Jim has achieved such prestigious recognition from the IEC community.”

As one of two Canadian recipients this year, Eichner received the award in a special presentation during the September 12 meeting of the Canadian National Committee of IEC in Ottawa. A total of 124 experts from 46 technical committees and 21 National Committees were nominated to receive this year’s 1906 Award, which recognizes exceptional recent achievements related to the activities of the IEC and which contribute in a significant way to advancing the work of the commission.

Eichner is the compliance engineering manager for Schneider Electric’s Renewable Energy Business, and is a career product safety engineer. After obtaining his Electrical Engineering degree at the University of Toronto, he began his career at the Canadian Standards Association in 1985, doing product safety work on power electronics. Since 1992 he has been in industry, working on product safety, standards compliance and standards development in the renewable energy and mobile power fields.