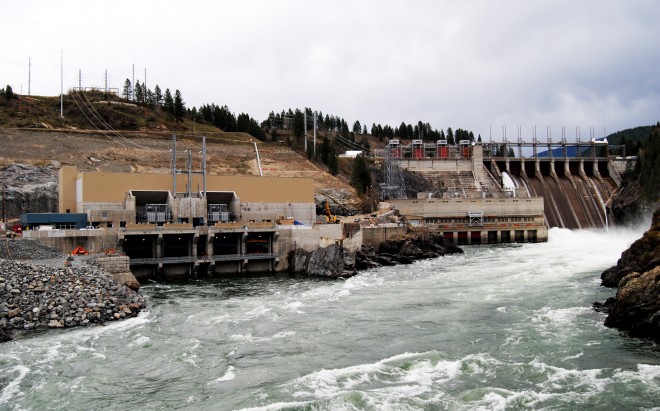 The $900-million, 335MW expansion adds a second powerhouse, immediately downstream of the Waneta Dam on the Pend d’Oreille River, that shares the existing hydraulic head and generates “clean, renewable, cost effective power from water that would otherwise be spilled,” said WELP.

The project included construction of a 10-km, 230kV transmission line and provides enough energy to power about 60,000 homes per year. Long-term agreements are in place with BC Hydro to purchase the energy and with FortisBC to purchase the capacity from the project.

According to WELP, project benefits include the injection of over $300 million into the local economy through the purchase of goods and services and wages. Employment reached over 1,400 people.

The eighth largest infrastructure project in British Columbia, the Waneta Expansion Project was completed six weeks ahead of schedule and on budget while maintaining an “excellent” safety and environmental protection record, WELP added.

“This project is a testament to the can-do attitude of British Columbians,” said John Walker, executive vice-president of Fortis’ Western Canadian Operations. “As the majority owner, Fortis Inc. would like to thank all the workers that made this project a reality keeping it on budget and ahead of schedule.”

“This achievement is the culmination of the vision and efforts of so many,” said Neil Muth, president and CEO of Columbia Basin Trust. “This project provided many direct benefits from jobs to local spending, and the region will continue to see benefits as the Trust uses the revenues to support well-being in Basin communities.”

To acknowledge the efforts of everyone who worked on the project, a keepsake book is being produced and a family BBQ is being planned. Register to receive your book and/or attend the BBQ at: http://fluidsurveys.com/s/waneta/.

An official opening presentation will occur in the coming months, WELP noted.